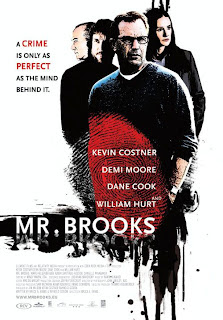 Cat and mouse tales between a smart-ass cop with a traumatic personal life/past and a brilliant psychopathic serial killer have been explored innumerable times, both in great movies like Seven and Silence of the Lambs, as well as in predictable run-of-the-mill thrillers. But in an interesting reversal of most psycho movies, Mr. Brooks places us directly in the mind of the pattern killer, letting us know his moves and his inner conflicts. Kevin Costner (cast very effectively against his type) stars as the eponymous Mr. Brooks – a rich entrepreneur, a respected philanthropist, and a doting father. However there’s one catch here; he is also the brilliant, meticulous and vicious ‘Thumb-Print Killer’. William Hurt is terrific as his complex split that has compelled Brooks to be addicted to murder, while Demi Moore is a detective, in the middle of a nasty divorce, with an enviable record against serial killers. A dark, compelling and innovative thriller with smart plot twists, dense narrative, moments of calculated suspense and chills, and interesting character developments, Mr. Brooks, which is honest enough to never attempt to reach high artistic standards, will surely provide sufficient guilty pleasure to movie buffs who are ready to follow the principle which goes by the name “suspension of disbelief”.

i had a feeling Costner would make some kind of a comeback; he's not such a bad actor... plus it's interesting how Dane Cook went from stand up comedian to starring in a ton of major movies

Yup, Costner isn't a great actor, but not a bad actor as well. In fact he was very effective in this movie. Dane Cook was not bad either.

Wow, I thought I was the only person who saw this movie. It's not bad at all, Costner was good here, maybe because he's kind of a goody two shoes most of the time and that help give Mr. Brooks an edge. I second your rating score.

Well, you certainly have company my friend. You're right, casting Costner was a really good decision, because he turned out to be perfect for the role.