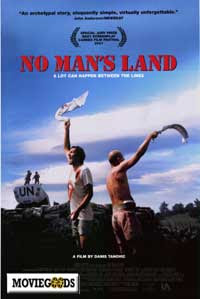 A caustic and bitingly sarcastic movie, filled with lashing, black humour – No Man’s Land is one of the finest movies made on the absurdity and futility of war. Interestingly, the movie doesn’t show any live action. Rather, the entire movie is filmed in and around a trench in no man’s land between Serbia and Bosnia, during the long and ugly Balkan war. Soldiers from both sides get trapped in the trench, and the ensuing movie covers their plight, confusion, and prejudices, as well the hypocrisy and double standards of the “neutral” forces (and journalists) who are there apparently to prevent damage and impartially capture the reality, respectively. The morality espoused, especially the brilliant irony of the climax, is subtle, yet its impact is profoundly moving. If anyone ever has any doubts as to abolishment of war cry, he must begin his education with this apparently simple yet immensely powerful movie.

Nice review. Loved the film too.

Thanks for visiting our blog and the comments.

It's very easy to add image. Just search for the image on the net then save it, and use the 'Add Image' button from the compose post console to add it whenever you compose a new post. Hope it'll help.

Thanx for your comments as well as your help.
The problem was particular to internet explorer. Got solved once i made the switch to firefox.

Why is it that you have to review all the good films? I want a zero rating rvw... they r so much fun! ;D

first of all thats a really nice pic...as for u'r question,there r so many good films to review that there isn't much time left to review da bad ones...nondaless,i'll surely review a couple of bad movies for u...so kp visitin...