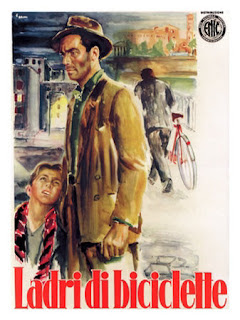 One of the most heavily laurelled movies and of high historic importance, The Bicycle Thief, directed by the Italian maestro Vittorio De Sica, ushered in a new era in filmmaking – Neo-Realism. Shot in natural locations, enacted by amateur performers, and portraying the simple joys and tribulations of human existence, the movie inspired a generation of filmmakers, including the great Satyajit Ray, bent on depicting life and realism at its purest. Set in the impoverished post-War Rome, the movie is a near-poetic chronicling of a man’s frantic search, along with his young son, for his stolen bicycle without which he would loose his job. The movie is a lyrical commentary on father-son chemistry and the mundane emotions of an everyday man, told with brutal honesty and painted with a subtle concoction of humour and pathos.

Yeah, a great movie this one...