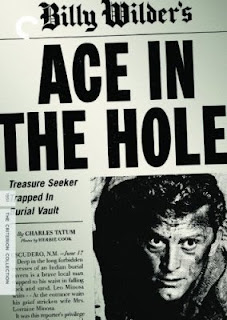 One of the greatest movies ever made on journalism (yellow journalism to be precise) and also perhaps one of the most scathing attack on it, this Billy Wilder masterpiece paints an acerbic, caustic and exceedingly bitter picture of news hungry journalists and the public’s insatiable desire for sensationalism and circus at the expense of others. Kirk Douglas plays the complex role of an unrelenting, heartless cynic and opportunist, who has a knack for creating news out of thin air, with supreme ease in what is regarded as the greatest role of his endearing career. The protagonist’s belief, that “there’s no news like bad news”, neatly summed up the morality, or lack thereof, espoused by the film, much to the chagrin of people who feel that the world is a good place and life is beautiful after all. A classic anti-hero movie where evil triumphs over good, and where hopes and niceties are thrown out of the window like garbage – this is a world that evokes memories of Wilder’s Sunset Blvd., and forms a perfect counterpoint to the world we live in.