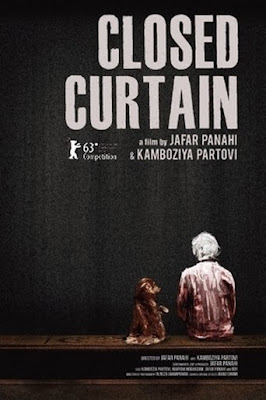 Directed by Jafar Panahi, one of the most persecuted filmmakers, Closed Curtain was, quite miraculously, the second film after This is Not a Film that he made after the Iranian government charged him with sedition and handed him a 6-year jail sentence and a 20-year ban on anything to do with cinema. Therefore, understandably, this heavily formalist and allegorical film was less a regular feature and more an expression of protest, crisis and dilemmas – a personal agitprop, if you will. It begins with an unnamed middle-aged screenwriter (Kambuzia Partovi) taking shelter in a villa at a secluded locale overlooking the sea, in order to protect his pet dog from authorities since canines have been banned by Islamic Law. He covers the house with dark drapes in order to ensure complete seclusion and concentrate on his writing. His peace, however, goes for a toss when a political dissident barges into his place and leaves his beautiful, enigmatic sister (Maryam Moqadam) there. And then, in a unanticipated revelation, Panahi himself appears on the screen and is shown engaged in various mundane activities of daily life, passing by posters of his movies, filming Partovi, and watching mobile video of Mowadam walking into the sea, thus making it clear that the two characters represent the director’s alter-ego, subconscious, and mode of political statement, while also making the artificiality of the medium stark. On account of its highly experimental nature, departure from standard idioms of feature filmmaking and structuring, it’s likely that most would find this a laborious and difficult watch, and tad pretentious too. Though I’d have preferred a subtler approach, there’s no doubt that this is an important work for a multitude of reasons.

This is an incredible festival you have attended on and are reported on Shubhajit! Really to die for. Yet another film and director I hanker for, especially as I am a huge fan of THIS IS NOT A FILM. I know well and am disgusted at how the director has been treated by the Iranian government, and hope one day he can leave the country. You deal with your subject here brilliantly.

Would you believe it that this was my first Panahi? I know, I should be too embarrassed to say that out loud. But I have been aware of the quagmire he's in & the way he's been treated by his government, and hence so, perhaps, this might just have been the perfect film to start him with.