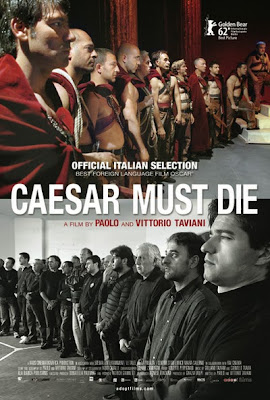 Directed by Taviani brothers, octogenarians Paolo and Vittorio, Caesar Must Die, their first directorial venture in 6 years and hailed by many as their return to form, is an affecting, ingenious and humanistic film that blurred the lines between fiction and documentary. Enacted by people who played themselves, viz. inmates serving long sentences (including life) from the maximum-security wing at Rome’s Rebibbia prison, it chronicled their stage production of Julius Caesar. As a critic wittily observed, “the inmates learning to act are acting like inmates who are learning to act.” It began and ended in colour with the concluding scenes from their performance in front of a rapturous audience. On the other hand, the intervening scenes, which showed the announcement of the grand event by prison authorities, selection of the cast, and their numerous rounds of individual and collective rehearsals, were shot in muted B/W. The immersive turns by the various members, particularly those who played Brutus (Salvatore Striano), Cassius (Cosimo Rega) and Caesar (Giovanni Arcuri), were particularly brilliant. And the way the characters they don so deeply affected them personally is sure to leave one touched. The tragic nature of their lives, and the choices they might have made that landed them where they were, made for a nice juxtaposition with the play. However, despite the film’s deep-set emotional wallop and poignancy, moments of humour in between, and the score that complemented the reflective tone, it didn’t feel as major a work as I was expecting – perhaps joining the characters’ violent and criminal pasts with the roles they play could have added more layers to it. But its sheer uniqueness in terms of ideation and refreshing approach made it a worthy watch.

CAESAR MUST DIE is a novel idea embracing the real and imagined, but this Italian drama-film based on Shakespeare never manages to connect on a the human level that “Julius Caesar” did, and despite some brilliant sections, it’s often a tedious watch and listen. This is how I felt after seeing it back in February Shubhajit, but I am willing to give it another shot. I like the Taviani brothers, and anything dealing with the Bard always pulls me in hook, line and sinker, but for some reason I wasn't all that engaged. certainly your tremendously insightful piece makes a strong case for another viewing.

Thanks Sam. Well, I did like it, though I'm sure awarding it with Golden Bear at Berlin was stretching it too far. I felt the film could have been really brilliant had some strong connection/parallels been drawn between the play and the people who play the various characters. Nonetheless, I did like its humanism, the novel approach & its gently affecting quality. But yes, I do understand your point of view as well.