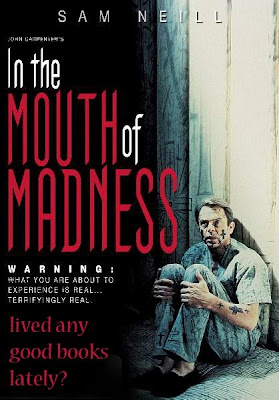 A comparatively lesser known film of prolific horror filmmaker John Carpenter, In the Mouth of Madness had a darn interesting premise, and a fair share of eerie developments and deliciously spooky moments to add to that. Moreover, one couldn’t have hoped for a better start that is sure to grab one by one’s collars, with self-reflexive touches strewn throughout that would surely be of interest to genre enthusiasts. However, a relatively insipid second half on account of a steadily deteriorating script, intrusive sound effects and a few gothic and body-horror elements that should have been done without, dampened what had promised to be a cracker of a horror film. Fortunately, Carpenter managed to save the day somewhat by upping the curve at the finishing line courtesy a wickedly funny finale. John Trent (Sam Neill) is a cocky and top-notch insurance investigator who is called in to investigate the sudden, mysterious disappearance of immensely popular horror novelist Sutter Cane (Jürgen Prochnow), whose books are creating disturbing effects on the crazed readers – it starts with disorientation and increasingly progresses towards rabid lunacy. Convinced there is a rational explanation behind this, and with a fair assumption where he might be, he embarks on a journey to find him, with Cane’s sultry editor (Julie Carmen) in tow. But, as it turns out, he ends up entering right into his story filled with deranged killers, madmen and psychos. The sections featuring the author, unfortunately, are among the weakest parts of the film; Neill, on the other, did a good job of portraying his character’s arc from dismissive arrogance to paranoia and madness.

I only recently found out about this movie, as I've been expanding my Carpenter a bit. Its premise sounds fascinating but I've heard some mixed things. Great review, makes me excited but not TOO excited for the film haha- I definitely want to see it but might temper my expectations!

I saw this movies amany, many years ago.

This film had it's own share of likable scenes in it.

Consider the scenes where sam neil tries to escape from the village and he keeps on getting back to the same place.

P.S.: Have you seen The Night Flyer? Stephen King's short story converted into a film?

@Alex:
Yes, the premise is most certainly darn interesting, but you're absolutely right about the mixed reviews. I'd suggest when you give this a try (and you needn't have this at the front of the queue of your Carpenter must-watch-list), do so with a pinch of salt.

@Viswa:
Interestingly I'd watched this movie long back during my school days but became aware only recently that this is a John Carpenter film. Yeah, it had its share of engaging scenes, and some of them were quite chilling as well. Nope, I haven't watched The Night Flyer - how's it?