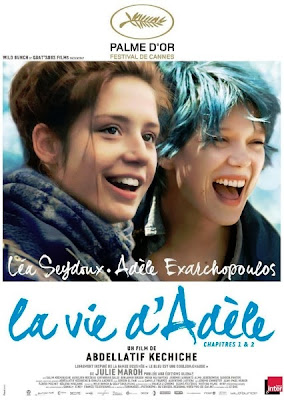 Blue is the Warmest Colour is a tender, charged, layered and heart-wrenching drama that seamlessly combined a number of themes into a beautiful whole. Through the homosexual affair between two young women, it explored such connected themes as coming-of-age, sexual awakening, artist-muse relationship, the joy of first love and its evolution with maturity, the attitudes of societies that continue to find such relationships as ‘queer’, and the consequent effects on an impressionable mind still wavering between what she wants and what she ought to want as per her social upbringing. Based on the graphic novel Blue Angel, it charted out, in a deeply affecting tone and a quiet leisurely pace, the emotional and physical journey of Adèle (Adèle Exarchopoulos), a cute, sweet, introverted and fragile teenage girl, who falls madly in love with the older fellow-Parisian Emma (Léa Seydoux), a smart, confident and blue-haired art student who is open about her orientation. The two, therefore, couldn’t have been more different, and that made their blazing and blistering love affair over the next few years – from initiation and tentative exploration, to crazy love and intense passion, to tragic collapse and heartbreak, to finally some semblance of personal reconciliation and the veneer of peace – all the more memorable. Exarchopoulos gave an exhilerating performance as the protagonist – not only was she electrifying in her controlled display of a gamut of emotions and unbelievably uninhibited in the scandalously intimate sequences, she even managed to convey the passing of years from adoloscence to adulthood through subtle physical and behavioral transformations. Seydoux, too, was more than competent as the only other key character in this massive 3-hour film.

Superlative examination of the myriad themes and artistry of this masterpiece, seemingly a well-deserved winner of the Palme d'Or at Cannes. For me this is surely one of the 2 or 3 best films of 2013, and one that continues to haunt me weeks after seeing it at a NYC theater. The film is erotic, intense, and features two superlative performances by Adele Exarchopoulos and Lea Seydoux, and is based on a graphic novel by Julie Morah. No film in memory has been more highly charged by graphic lesbian sex scenes. The relationship between the two women is marked by the stronger emotional and intellectual investment of one, and the unbridled passion of the other, hence ‘class’ is just as important as ‘sex’ in this doomed equation. The film’s controversy centers around the kinky sex scenes, but such shallow appraisal misses the mark by some distance. There are far more meaningful and fascinating aspects of this riveting work.

Again, I applaud you for an extraordinary review, one that leaves not a stone unturned.

Thanks a lot Sam for the kind appreciation. Yes, I do certainly remember your strong recommendation of the film when you'd watched it & posted about it at WitD. The hype surrounding the film was huge & consequently, it seemed, the entire city at turned up for the show I'd decided on at Calcutta Film Festival. After watching the film, I felt tad underwhelmed, but interestingly, it gradually grew on me - so much so that by the time I wrote about it here (which was a few days after my watch) I was ready to consider it as one of the best films of the year. So, even though some of its detractors have claimed that the reasons for awarding it Palm d'Or were political (its subject, plus the fact that the director is of Tunisian origin), I couldn't disagree more with it. Personally I might have voted for Jia's A Touch of Sin, but this sure would come close. And Adele in particular gave a truly breath-taking performance - the way she managed to capturing the increasing age & maturity of her character, through subtle physical & behavioural changes, was astounding. The film was bound to create controversy because of the explicit content, but I completely agree with the shallowness of viewing the film as thus. In fact, it might just rank amongst the finest romantic dramas of our age.