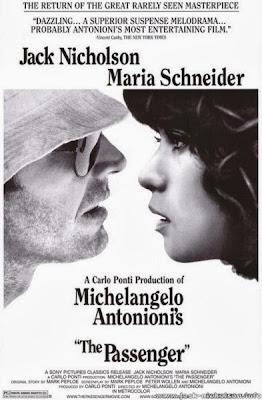 Nearly a decade after his most influential days Antonioni spectacularly returned to form with possibly his last masterpiece, The Passenger. It contained all his distinctive thematic concerns and stylistic choices – urban alienation, deep existential crisis, a fatalistic sense of ennui, and leisurely pacing. In a symbolic expression of the protagonist’s barrenness and disenchantment, the story begins at a desert. David Locke (Jack Nicholson) is a successful TV-journalist, and is in Chad for a documentary on the country’s political rebels. However he’s so utterly bored with his life and job that, in a moment of sudden inspiration, he switches identity with a dead globe-trotting businessman he shares an eerie physical resemblance with. However, as it turns out, the man was an illegal arms dealer to the same rebels he’d been documenting. Meanwhile, while his separated wife (Jenny Runacre) starts joining pieces of his “death”, he embarks on a journey with an equally directionless architecture student (Maria Schneider) he meets in Spain, and that ends up adding what he’d been missing all along, viz. a sense of purpose, which makes his desire to hold on to his false identity that much stronger. But, getting lost, he realizes, isn’t that easy. Nicholson’s remarkably understated turn as the quintessential Antonioni protagonist, and the narrative arc his character undertakes, were reminiscent of his unforgettable turn in Five Easy Pieces. The film was a technical tour de force, and deceptively so. In one early scene, the present moves to flashbacks and back to present within a single take. And the bravura penultimate scene, comprising of an incredibly complex single-take dolly shot, needs to be seen to be believed.

"It contained all his distinctive thematic concerns and stylistic choices – urban alienation, deep existential crisis, a fatalistic sense of ennui, and leisurely pacing."

Terrific sizing up and a fabulous review of a film that has gained in reputation over the years to the point where for the masses it may be the favorite and most accessible Antonioni film.

Thanks a lot Sam. The film does have its share of detractors, and hence is a bit like Blow-Up in that respect. But yes, it does reach a sense of closure at the end, instead of the story being left to hang in mid-air like his other films, and that probably made it comparatively more accessible to a wider audience.