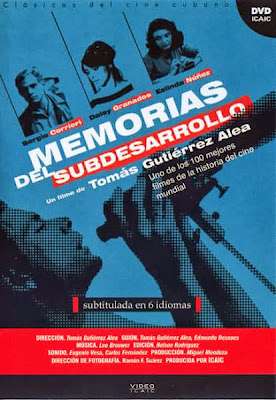 Memories of Under development, Cuban filmmaker Tomás Gutiérrez Alea’s art-house classic, was a fascinating amalgamation of the political and the personal. The most acclaimed Cuban film, along with Kalatozov's I Am Cuba, after Fidel Castro's popular revolution had swept aside the Batista regime, it provided a formally, aesthetically and psychologically arresting peek into a left-minded bourgeois writer’s ennui, anger and existential crisis at the backdrop of the flux between the Bay of Pigs invasion in 1961 and the Cuban Missile Crisis in 1962. Sergio (Sergio Correri) is a wealthy intellectual who has decided to stay back in Havana while his wife, friend and family, along with hordes of others, flee to the US. He despises imperialism and the bourgeois-class, even though his lifestyle is anything but that of the proletariat – and this ironic dichotomy was used as the springboard for the portrayal of his aimless existence as an outsider, his severe alienation, his casual flings devoid of emotional attachments, and his caustic sociopolitical ramblings. He faces a moment of crisis when a young and attractive but unpredictable girl (Daisy Granados) he gets involved with accuses him of rape, but even there he is hardly ruffled. The stylized and moody B/W photography was interspersed with cinéma vérité style documentary footages, which provided a startlingly here-and-now feel that marvelously juxtaposed the protagonist’s internal chaos and vacuum with the external uncertainty and developments around him. Correri, who seemed to be sleep-walking through his role, effectively captured the multi-layered Sergio.

I have an interesting history with this film Shubhajit. I first saw it at the now-defunct First Avenue Screening Room in Manhattan in 1973, and as a first year college student it exerted an enormous influence on me at an impressionable time, and single-handedly spurred me on to a sustained study of art-house cinema. I remember writing areview of it for my college newspaper, and placing it in the Top 3 of that year on my December list, even though the film did originally release in Cuba in 1968. I do feel it's searing existential angst and haunting narration (Correri is superb) elevate to the level of greatest Cuban film ever made, and your analysis here is stellar!