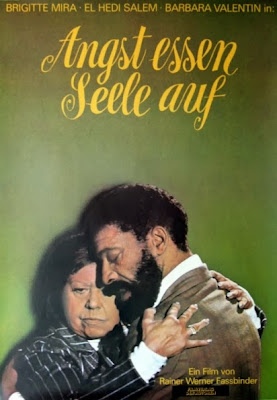 RW Fassbinder left behind a staggeringly prolific body of work, despite having died at the young age of 37. The fact that he took just 2 weeks to make this film perhaps explains his speed. Ali: Fear Eats the Soul, one of RWF’s most renowned works, was a classic example of a social message film with a tightly bound core focus and the point of view stressed upon through the use of a distinctly melodramatic style. The film’s two protagonists are, Emmi (Brigitte Mira), an ageing, widowed and lonely German lady, and Ali (El Hedi Ben Salem), a young Moroccan immigrant. The first scene itself introduced the two characters to us and to each other, when, in order to escape from the rain, Emmi enters a bar and ends up being accompanied by the terse but courteous Ali to her home. Before long the two decide to get married, and therein starts their battle with the intensely prejudiced society in which they reside and in turn with each other too – the former because he isn’t one of them, and the latter because of their age and social difference. Brevity and succinctness were among the key traits of this film as RWF didn’t waste time in covering details of their love story. However, that was also one of the alienating factors as, despite being essentially likeable characters and their craving for companionship, one is still left clueless as to what triggered this cross-ethnic May-December romance. In the end, his motive was clear – portrayal of the innate racism, xenophobia, social conservatism, hypocrisy and narrow-mindedness prevalent in his country, and in all honesty, nearly everywhere, and it managed to be touching and thought-provoking, if tad loud at times.

Fassbinder is quickly turning into one of my favorite directors the more that I see of him. Although this one isn't my FAVORITE, it is important as he began to incorporate the flavors of Douglas Sirk into his work, and this one reworks All That Heaven Allows in a new setting. You're right though he was extrememly prolific and the number of works to track down is staggering.

Yes, I'm aware of Fassbinder's love for Douglas Sirk's films, and that this was inspired from the Sirk film you mentioned. Unfortunately, I haven't watched any of Sirk's works yet. But, coming back to RWF, I'm developing more of a mixed feeling about him. I personally rated the BRD Trilogy as great, but I'm didn't manage to be as fond of Ali or Berlin Alexanderplatz as most people are. Even for BRD Trilogy, you might have noticed that I'd rated them either 'Essential Viewing' or 'Highly Recommended', but somehow none of the three managed to break into my list of '100 Favourite Films'. Maybe someday they will when I re-evaluate them or think of them on a different light. His films, from what I've observed, had a distinct set of formal, stylistic & narrative traits - which either one just falls for, or appreciates from a distance. But yes, there's no doubting he's one filmmaker one needs to watch - he's too important to ignore or relegate.

Fassbinder is one of the greatest directors to come out of Germany, but he's also one of the most remarkable prolific when you consider his early demise (as Shubhajit notes here). The director's love of Sirk is of course most evident in this film, which is absolutely one of my favorites by the director, and one of his irrefutable masterpieces (with BERLIN ALEXANDERPLATZ, IN A YEAR OF 13 MOONS, and THE MERCHANT OF FOUR SEASONS are among the other greats) and you have done a fabulous job sizing up this essential work. Agreed totally on Fassbinder and hope you get to a number of his other works!

Indeed Sam. Fassbinder was one of the tallest leaders of German New Cinema, along with Herzog & Wenders. His BRD Trilogy is the most favorite of mine among the ones that I've watched so far. I'll surely be exploring more of his films, including 13 Moons & 4 Seasons. Interestingly, Berlin Alexanderplatz was the 1st Fassbinder that I'd seen.