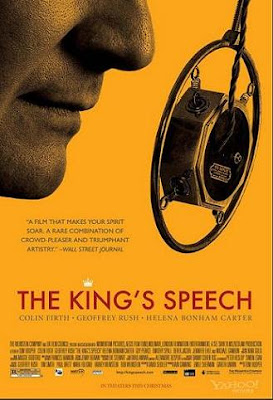 The King’s Speech reminded me of The Queen, another terrific movie with the British royalty as the focal point, even though the two films are as different from each other as could be. Prince George might not have been a direct heir to the throne, but when his ailing father expires and his older brother abdicates the throne, he must take up the responsibility, especially with World War II looming around the corner. There’s just one catch though – he stammers while speaking, and the situation deteriorates manifold when called for public speaking. Thus, courtesy his loving wife, he gets acquainted to Lionel – an unconventional speech therapist. Though he takes an instant disliking for his flagrant insubordination and his quiet disregard for people at power, a profound bond eventually develops between the two, and despite their occasional differences, King George VI eventually rests his complete trust on the wise-cracking proletariat. The film is pretty straightforward narrative-wise, making it an easy watch. And though it lacks the utter brilliance and depths of The Queen, the two does have a similarity in terms of exceptional performances. Colin Firth, as all the critics rightly say, is indeed outstanding as the stuttering king, and so is Geoffrey Rush as a commoner who becomes a dear friend to the king.

Shubhajit, it may indeed lack the profundity of THE QUEEN, but all and all I still found it a bit better movie. Don't get me wrong, I liked THE QUEEN quite a bit, but THE KING'S SPEECH just pushes all the right buttons. Even if that seems like a rather dubious recommendation, it's posed in the best sense. Yes I agree that Firth (in his Oscar-winning performance) and Rush are wonderful (as is Carter, Jacobi and a few others; only Spall is miscast) and Alexander Desplax makes excellent use of Beethoven's Seventh. It's lovingly set, costumed and shot, and the picture is set at an irresistible time. A real audience-pleaser and done with consumate craftsmanship.

Fair enough I guess. I always maintain films, and arts in general, are entirely subject. Yeah, both are extremely good films. I loved Queen and would rate it higher, but then, given your candid assessment of the 2 films, I can very well appreciate your point of view. Thanks for initiating the discussion Sam.

"The King's Speec was just too predictable and hollywood for me, although credit to the acting, and hats off to the way they made the atmosphere feel like the past.

Well, for me, King's Speech wasn't as much about an unpredictable plot, as it was about the performances & the buildup of the character, mood and the interactions between the protagonists. Thanks for stopping by.

You're right, the bond/friendship between Firth and Rush gave the film some warmth and humour, although the other characters I thought were fairly forgettable, such as Helena Bonham Carter.

I didn't think the film deserved oscar for best screenplay or best picture, to me it was a pretty formulaic "come good in the end", redemption story we've seen many times before. Then again, people say the oscars is the most commercial of the awards shows, so maybe it's to be expected. The independent spirit awards are far more interesting to me these days.

Yes, there indeed are aspects of the film that are formulaic, and that was precisely the reason why I expressed greater love for The Queen. It was the acting of the two principal characters that made the film such a treat to watch.

As for Oscar, I agree that it does tend to dish awards that make it look commercial at times. But then again, I'd say it also does award a lot of very good films too. So I'm not much averse to it.

Thanks for joining in the discussion.