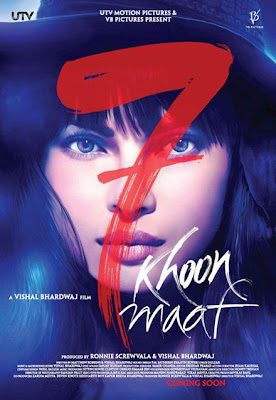 Adapted from a short story by Ruskin Bond (who is, ironically, best known as a children’s writer), Vishal Bradwaj’s 7 Khoon Maaf is a dark and twisted journey, even a phantasmagorical one at times, through the life of its damaged protagonist. Susanna is a beautiful and elegant lady, she has an aristocratic lineage, she’s always surrounded by a devoutly loyal coterie of orderlies and servants, and all she craves for is simple and unconditional love. Yet, as luck would have it, she gets married to one grotesque man after another – a wife-beating chauvinist, a crazy drug-addict, a two-timing Russian diplomat, a double-faced sadomasochist, an unctuous pill-popper, and a vicious murderer in the garb of a gentility; and she responds, as the title suggests, by sending each of them to their graves. The film is very well photographed, peppered with some lovely numbers, and boasts of a marvelous ensemble cast comprising of the likes of Naseeruddin Shah, Anu Kapoor, Irfan Khan, John Abraham, Neil Nitin Mukesh, and Konkona Sen-Sharma. But the most striking aspect of the film, undoubtedly, remains Priyanka Chopra’s absolutely incredible performance as the enigmatic Susanna. However, the film could have been edited into a more compact whole as some of the sub-plots dragged at times. The guy who provides us with the voice-over was also disappointing as he seemed to be trying really hard to copy Shahrukh Khan of all actors.

I admire the way you write this review being no exception. You have rightly pointed out that the film could do with some editing. Also the film would feel much fuller if the John Abraham part had a little more of him than the songs. But for me it was Vivaan Shah's narration that made me watch it twice. I dont know if he has tried to immitate Shahrukh Khan or not, but his pronunciation and dialogue delivery has a certain Urdu accent that has been missing from our screens for some time and something that a lot of Hindi lovers pine for.

Thanks Nabo for your summation of the film. Well, the guy's narration was reasonably good - I'll have to agree with you on that. It was his acting that I found highly disappointing. Perhaps Vishal Bharadwaj ought to have limited his presence in the film just to his voiceover. Also, the scene where he turns down Priyanka's advancements - well, I found that a tad unrealistic given his life-long infatuation with her.

I admire the qualities you attest to here--the phantasmagoric elements and the implied visceral filmmaking. Trying to copy Kahn with that voiceover is lamantable I'll admit though, but great that teh cast delivered big-time. It is quite ironic indeed that this material was sourced ffrom the work of a "children's writer!"

Thanks a lot Sam. This is an interesting film, and I'll say you too could give it a try if it is being shown at your place.