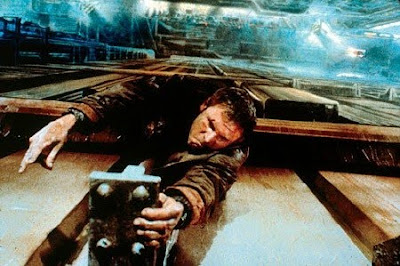 Blade Runner doesn’t just rank along with Alien as Ridley Scott’s best film, it also finds place amongst the most influential sci-fi films ever made. Yet, quite interestingly, the film, based on Phillip K. Dick’s Do Androids Dream of Electric Sleep, was as much a post-noir detective story with evocative romance and commentary on memory and identity integrally woven into it, as it was a futuristic thriller. Circa 2019… the world has become a post-modern portmanteau of skyscrapers and enormous neon advertisements, and in this dystopian urban jungle, a lonely retired cop (Harrison Ford) is called back to duty to hunt down 'replicants' (human-like next generation androids). Yet ironically, he also finds himself falling for a beautiful replicant who’s only now comprehending her true identity. The ambitious film's arresting, hyper-stylized visuals, and bravura post-production design of expressionistic, cyber-punkish exteriors and dank interiors, were superbly complemented by a dense storyline, tone and mood that covered the entire arc from the existential to the subliminal, with a melancholic soundtrack as company. It was dark, disturbing, audacious, grim, intensely captivating, thematically complex, and a unique viewing experience. The film was received poorly when it first released; but with time it has earned its place in the pantheon of acclaimed and groundbreaking cult classics.

I love Blade Runner, so much better to me than Children of men, which tried to imitate the atmosphere.

Which version of Blade Runner did you see?, the original for me had a cheesy ending, while the 1992 directors cut removed the voice-over, which some thought was unnessasary, I kind of liked the narration myself from 1982.
The final cut from 2007 contained a few scenes with unicorns etc, which added to the speculation if H. Ford maybe was a replicant.

Yes, it's debatable which is Ridley Scott's best, Gladiator I also regard as among his masterpieces.

You might want to check out my article on Blade Runer. Nobody seems to have commented on it yet, which is a pity, since I spent a long time researching ( :

I saw the Final (Director's) Cut. Yeah, I too have read about the changes that were made in the final cut. However, since I haven't seen the original version, wouldn't be able to give my opinion as to whether that was for good or for worse.

I know Gladiator ranks according to many as a great film. To be honest, I wasn't as overwhelmed by it as others, as I found it mostly a simple, mainstream film, nowhere a challenge for, say, Blade Runner, Alien or Thelma & Louise.

As for your article on Blade Runner, I'll give it a read soon. I know its a really bad feeling when you feel hard work is going unappreciated. :)

Awesome movie, simply epic, but if you don't go into it with some patience to spare, I can see how it could put someone to sleep.

Submit your blog into http://en.hamarivani.com. Hamarivani is an Indian Blogs Aggregator.

"The ambitious film's arresting, hyper-stylized visuals, and bravura post-production design of expressionistic, cyber-punkish exteriors and dank interiors, have been superbly complemented by a dense storyline, tone and mood that covered the entire arc from the existential to the subliminal, and a melancholic soundtrack. It is dark, disturbing, audacious, grim, intensely captivating, thematically complex, and a unique viewing experience."

Boy that is quite a mouthful there Shubhajit, and one couldn't possible size this up any better in terms of word economy and insight. I won't forget my experience of seeing it on a giant screen just a few years ago during Allan Fish's first visit to the states. I completely agree too that's it's seminal science-fiction, hugely influential and one of Scott's two best films with ALIEN.

Thanks a lot Sam, you really are too kind :)

Wow, you saw the final cut in a big screen recently - that must have been one hell of an experience! Unfortunately, I wasn't born when the movie had first released, and the final cut never made it to Indian cinema halls (as far as I remember). And the fact that you had Allan Fish as company must have been the topping on the cake.

Really, Blade Runner & Alien, and to a slightly lesser extent Thelma & Louise, are great works by Scott. Though he has made some reasonably good films aftre that, unfortunately, i.e. as far as I'm concerned, he never really made another film (and that includes Gladiator) that would even come close to those three.