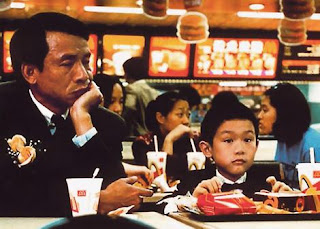 Yi Yi, the final film by legendary Taiwanese filmmaker Edward Yang, is a masterful exploration of the mundane details, foibles and moments of personal disappointments that often come to define one's life. Yet, conversely, it is also a moving celebration of the very act of living. This multi-generational saga and layered human drama starts with a bumbling marriage ceremony which doesn’t just set the film rolling, but also forms a subtle metaphor for the slowly disintegrating middle-class family it is based on. Each character is grappling with both familial and personal issues that make the older members reminisce of their heartbreaks, while educates the youngsters to come to terms with the fact that life is rarely fair to all. Every single person has been so meticulously delineated with soft, fine strokes, and brought forth through such naturalistic performances, that they literally jump out of the screen and present themselves before us as vividly human and devastatingly real people of flesh and blood. The lush photography, the meditative (and melancholic) tone, the unhurried pace, and the profound depth of the rich storyline make the film unfold as an epic piece of literature while covering the entire spectrum from the simple nuances of quotidian life to complex examination of the universal themes of guilt and loneliness.

Glad to see you loved this, it remains the only Yang film I have seen, but it is one of my all-time favorites.

Thanks a lot Bill for stopping by. Yeah, this happens to be his only movie for me as well. I hope this forms a stepping stone for more for both of us.

This is really a great film about Taiwanese identity in particular and filmmaker identity in general. Too bad that the English translation coming along cannot capture the nuanced code-switching between the usage of Taiwanese, Chinese and Japanese. But surely, there is a lot about social change in this film as opposed to the historical depth revealed in Ho's "The City of Sorrow."

I would love to learn how you would think of Tsai-Ming Liang, whose films are more quirky and abstract.

Thanks a lot Perjuangan for stopping by and for apprising me about the subtleties about the languages used in the movie that is nearly impossible to even understand, leave alone appreciate, for a non-native viewer like me. Hence I can very well understand that this movie would appear even more magnificent for those who, like you, understand one or more of these languages. But, even without that, I was loved this wonderful work.

As for Tsai Ming-Liang, I've watched just one film of his - Rebels of the Neon God, and I'd found it decent, if not great.