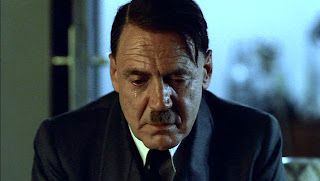 Call Adolf Hitler a genius, a few people will grudgingly agree; call him a twisted genius with the ability to mind-wash people, and a lot more will agree; but try and paint him as a human being, and, as a critic aptly observed, you’re certain to face a lot of backlash. It is nearly impossible to imagine him as a three-dimensional man of flesh and blood, but director Oliver Herschbiegel attempted just that in this audacious feature. The emotion that plays the strongest role in the movie is paranoia, as sociopaths like Goebbels, and well, the Fuhrer too, and their more practical counterparts like Himmler who are aware that the Nazi regime's downfall is imminent, are painted with meticulous detail over the last 10 days of Hitler’s life. The director covered a plethora of characters and events by broadening the movie’s scope, though personally I would have preferred the movie to remain just what it started with – an intimate portrayal of the man who, on one hand, turned Germany into a raging superpower, while on the other, perpetrated such monstrosities that make people shudder even after over 60 years of his joint suicide with his wife/mistress Eva Braun at his bunker. Any personification of Hitler inevitably turns into parody, and here’s where Bruno Ganz has succeeded in his chilling and volcanic recreation of the complex leader of the German war machine and the madman who will go down in history as one of the most hideous villains known to mankind.

Criticism of attempts to portray Hitler in "three dimensions" has always confused me. Is he supposed to be rendered as a cartoon character instead? I understand, of course, the risk of "to understand is to excuse," but I think we can understand this man without forgiving him. I grew up on Alec Guinness's eccentric interpretation of Hitler but Ganz is far more convincing, even if only because as a German his performance seems less like a stunt. Yours is a fine review of a fine film.

A "chilling and volcanic" depiction indeed Shubhajit. And certainly a film that stays with you months and years after you've seen it for the first time. Ganz is extraordinary, and the many parodies on the net of this turn have only increased the exposure, but this is most assuredly NOT intended as a cartoon character, but as a historical replication based on scrutiny and research.

But you've nailed it Shubhajit!

The most chilling sequence for me was the killing of Joseph Goebbels's brood of children by cyanide capsules. I found that so disturbing I could never look at it a second time, when watching the DVD.

Aha, nice point. I,. for one, believe that it is essential for a filmmaker to humanize the Nazis (Yes, despite the fact that they're the foot-soldiers of a Jew-hating, mass murdering maniac and they need to be de-stryoed! ) because there is no point in alienating them. The important thing to realize is that they were one of "us" and they're still among us.

A chilling film and as our friend Sam J. mentions the killing of Goebbels children by the mother is brutally cold to watch. Worst than just a crazed genius is delusional crazed genius which is what AH becomes as the film progresses. The usual excellent precious review. Thanks!

Exactly!!! I guess the prime reason for Hitler having been portrayed mostly as a cartoonish, 2-D character in most movies lies in the conviction, intent and requisite "guts" of filmakers, traits which Oliver Herschbiegel displayed in ample measure. Thanks Samuel for the appreciation & for stopping by.

Thanks a lot Sam. Ganz really got me with amazing performance. That was really once-in-a-lifetime kind of performance. And yeah, the Goebbels sequence you've mentioned was certainly one of the most chilling parts of the movie. In fact the guy who played Goebbels had monstrosity written all over his face & persona - so superb acting there too.

Well, you've raised a very pertinent point there. One must try & know what went inside Hitler's mind to have even a semblance of idea as to what really made him do the things he did. But all most people manage to do exact what you mentioned, alienate him. And that just makes him that much more enigmatic to today's generation. Thanks a lot for sharing your views.

You've made a great observation there. The character graph of Hitler, even though covering only the last few days of his life, have been very well realised. The more delusional he became, the more he got driven towards crazy antics & ultimately suicide. Thanks a lot John for the good words.

Bruno Ganz’s performance captures Hitler’s madness and ignorance in one moment, then a gentle touch or shy whisper the next. He gives life to this wax historical caricature, which helps us to understand how those closest to him became intoxicated with his essence.

I reviewed this on my blog last year and was stunned. The image of tiny feet sticking out from under the blankets, forever cold, still haunts me.

Thanks a lot Alex for chiming in. You certainly have a way with words, and in those few words you perfectly brought out what has made the movie noteworthy and Bruno Ganz's performance such a remarkable feat.

Indeed, as Junge observed in the live footage and you captured in your review, youth certainly can never be an excuse for murder, nor ignorance an explanation for cruelty.

Nice write-up! Downfall is really a fantastic film. Downfall is able to successfully present a different perspective of Hitler that really hasn't been seen in other films.

Thanks for liking the review & for stopping by.