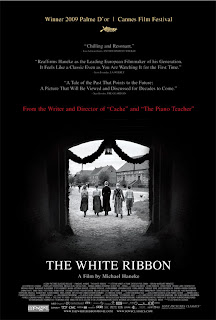 Michael Haneke’s latest feature, The White Ribbon, is an extraordinary work of high art. On surface viewing it appears to be a paradigm shift vis-à-vis the films Haneke has been mostly come to be identified with. The austere black-and-white appearance, combined with the somber tone and the nearly muted philosophical overtures are quite atypical of him. However, scratch deep and you’ll realise that the movie is as grim and as capable of provoking as any he has made, with themes like societal bigotry and the inevitability of violent eruptions even in the most peaceful of conditions playing vital roles. A psychologically haunting and visually ravaging film, the Austrian provocateur has attempted to unravel the cause of World War I though this complex, pseudo-mystery character study. As a series of seemingly inexplicable and unfortunate incidents start occurring in a small, paternalistic, and heavily orthodox German village, the veneer of civility and placidity that initially marked the villagers starts wearing off, revealing a snarl that is frightening in its display of hypocrisy, moral policing and repression. The movie has been presented through the eyes of a pleasant-natured and liberal outsider. The movie raises far more questions than it ever seeks to answer, and that, along with the implosive content and themes, makes for an arresting if disconcerting viewing experience.

Wonderfully written. I found this film to be just average . I thought it was doing exactly what it criticized - moral policing.

You have put the core of the film here in short form; Michale Haneke expressed his views about film as : "The seeds of deadliest emotions are there in a society that allows for nothing except goodness."

That is really a great food for thought....

@Alex: Thanks a lot Alex for the appreciation.

@JAFB: Thanks buddy. Well, this movie has produced reactions either way, and I guess we stand on the opposite sides of the line on this one :)

@Yayaver: Thanks man. That's a terrific statement - and it surely requires the most liberated of minds to appreciate the profundity contained in that statement. Thanks for sharing it.

Assuming you have quoted it verbatim, I find it as questionable as the movie itself: Isn't that what we all want? What is Utopia but a state of all goodness? But if by "goodness" he means a set of morals maintained by the "right wing", the statement reduces to something very bvious, that we all know: The more you restrict, the more rebellious one becomes.

I thought Michael Haneke was a socio-political analyst and a critic, but, if he meant that statement in the exact sense that it sounds here, out of its context, I fear he may be a real misanthrope. Could you please provide the complete text if possible?

Well, I'm quite certain that he didn't mean anything to do with utopia when he stated what Yayaver quoted. I know that Haneke is often accused of misanthropy, but that is beside the point.

What is meant was exactly what your second interpretation of the suggests - he referred to a right-wing plutocratic/theocratic/oligarchic society where moral, ethical, sociological & religious "goodness" is enforced upon "straying" individuals by the more "enlightened" patriarchs. The kind of society where unless you conform completely & absolutely to the strict beliefs of the so-called up-lifters of moral goodness of the society, you are punished and/or banished.

And yes, I agree that this meaning seems quite obvious; nonetheless, as I'm sure you'll agree, the statement has a strong pertinence even in today's times and thus its relevance is universal.

Indeed the film raises far more questions than it answers. Some of the most distant characters I have ever seen. Compassion rejected and replaced by oppression . Nicely written

Thanks John. Yeah, the film was structured in a manner to make reading or defining any of the characters a challenge in itself.

Another great write-up! This will be released on blu-ray March 15th in the UK. I've been waiting for almost a year to see this but it never showed in area.

I've seen every Haneke film and hesitate to give a final analysis because I often interpret the story differently when I revisit them. His films always linger in my mind long after the image has faded, and a second or third viewing always reveals some hidden treasure.

Thanks a lot Alex.

I believe any good work of art, has the ability to throw up a plethora of interpretations upon multiple viewings, which might not have been evident upon initial viewing. And I'm sure The White Ribbon, too, will not be an exception.

And by the way, I'm sure it'll be a great experience watching White Ribbon on blue-ray. The B/W photography will surely appear even more stunning.

Sorry, I dan't have full detail of this statement. This statement of Haneke about film was mailed by my friend. A single sentence can be interpreted in various meanings. But, i agree with Shubajit explanation.

That's OK, Yayaver. That's what he seems to be telling in this film too...

Got more in this matter. Michael Haneke on the themes of White Ribbon: " I've had this project in mind for over ten years. I was interested in presenting a group of children who are taught absolutist values, and the way they internalize this absolutism. My point was to show the consequences – that is, all sorts of terrorism. If absolutism is applied to an ideal, then that ideal, either political or religious, becomes inhuman. I had considered calling the film "The Right Hand of God." These children believe they are the right hand of God: they have understood the laws, and follow it to the letter. This makes them become the punishers of the others, who do not obey the same ideals. This is how the terrorism originates. The film should not be considered as a comment on fascism alone."


Michael Haneke on violence:
"I think there is violence in all my films. In the society in which we live, there is no way to avoid or get around the problem. However, in my other films, I've said more about the representation of violence in the media, about the way the media exploit violence. In my opinion, it's important to find an adequation with the subject I am trying to develop, an appropriate relationship. I cannot say whether I will return to this theme in the future. Each film, each subject, must define its own voice."

Thanks a lot Yayaver for getting hold of Haneke's views on the movie, in particular, and the inherent presence of violence in his movies, in general, and sharing it with us.

I think 'Right Hand of God' might have been an equally appropriate name for the film, and in a sense subversive too, but perhaps not as poignant or effective.

You're astute and always on the pulse of what a film's qualities and characteristics are. This is a fantastic review of one of our favorite films of the year!

Thanks a lot for the appreciation. Yeah, this was one hell of a good movie. Tough I haven't watched the film that won in the Best Foreign Film category, I still find it difficult to believe it was better than this stunner from Haneke.