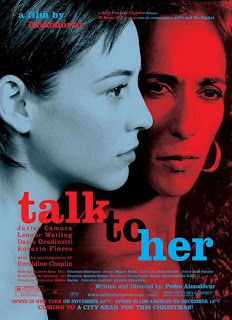 Pedro Almodovar, who is oftentimes referred to as a women’s director, has for once made a movie for their male counterparts with Talk to Her. Almodovar certainly knows how to turn a tale of offbeat, curious relationships into a stirring, even haunting ode to love, longing and loneliness. The movie follows the development of an unlikely friendship between a male nurse and a journalist – the former in silent unidirectional love with a comatose patient he is taking care of with singular devotion and the latter in a burgeoning relationship with a famous female bullfighter which comes to a screeching halt when she gets maimed on one not-so-lucky day at office. The movie is difficult to explain, especially in the kind of concise reviews that I write, as it is less about what transpires on screen vis-à-vis what goes within, unsaid and implied. Hence, though we may be able to seemingly distinguish between the real and surreal, the two, in essence, blend and get juxtaposed quite fluidly, thus creating a dream-like world, albeit comprising of undeniably physical people. The acting is natural without going overboard, thus ensuring that the complex emotional quotient at interplay between the characters manages to be powerful in its silent impacts. And thanks to the classical structure of the movie, the pathos in the characters and their interactions are all the more somber and perceptible.

Loved the film.
Generated some debate for the 'rape' of the comatose woman.

This is really a wonderful film, as expected from PA, dense with much to read in between. BTW, almost all of Pedro's early features were male-centric and so overtly autobiographical...

This is my favorite Almodovar of them all, an emotionally overwhelming film that has lasting resonance, weeks, months, years later. You do your customary exquisite job bringing the film to the fore, and I do like the juxtoposition of real and surreal. BTW, that song near the beginning is sublime.

This is one of the greatest films of the decade.

My apologies for the late response.

@JAFB: Well, I haven't watched many PA movies, especially his early features. I guess then that he shifted to female-centric movies in the 2nd half of his career.

@Sam: Thanks Sam. I agree, Talk to Her will be a strong contender for the best of the decade title. An emotionally affecting film like few others.

iA great site indeed. Thanks you very much..

Thanks you very much.. A great site indeed.

Your site's design, content and location is really good.

Thank you so very much a site is really useful.

Thank you very very much ..