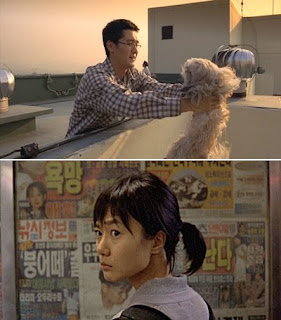 The refreshingly offbeat movie Barking Dogs Never Bite, by Korean filmmaker Bong Joon-ho, has all those thematic and stylistic aspects, quirks and trademark tar-black black humour that would reach memorable heights three years later in his Memories of Murder. Like the latter, this darkly funny movie managed to make me laugh and cringe simultaneously by gleefully throwing sharp, pointed jabs at the darker aspects of human nature and society. With an aptly discordant yet snazzy Jazz soundtrack as accompaniment, the movie presents the ordinary-as-hell lives of a dog-hating university lecturer married to a nagging wife and hoping to someday find enough money to bribe his way to a long overdue promotion, and a neurotic young girl who spends all her days doing tidbits of community service in the hope that someday it’ll earn her fame and recognition. The director, through his whimsical comic placements, ironies and searing observations, has made these two otherwise utterly mundane characters – in essence fringe personas of the society – unique, distinctive and utterly commendable through generous interjections of idiosyncrasies in their personalities and in their interactions. And like Ameros Perros, I'd strongly advise dog lovers & PETA activists to stay away from this one too.

Oh wow this sounds great! I wish this was available on Netflix, but the earliest Bong Joon-ho film they have is Memories of Murder.

Well, keep your eyes open for it. More than anything else, it forms a darn interesting introduction to Bong Joon-ho.

Yes, this is a hilarious film. I think Bong Joon-Ho is one of the few film makers who can get away with juxtaposing pain and comedy in such terribly inventive ways. Memories of Murder is certainly the funniest serial killer I have come across and BDNB is an affecting debut. I also think he a stronger and more consistent director than his contemporaries including the often over discussed Park Chan Wook.

Well, three and a half stars says more than your kind words. :) (and I think it's a half star too much).

Wait till you see "Mother". It's sublime.

@Omar: Well, I wouldn't go into comparisons with Park Chan-Wook. But yes, Memories of Murder, and to a lesser degree this movie, have certainly upped my interest for Bong Joon-Ho

@Sitenoise: I know what what you mean :) And well, I've managed to get hold of his Mother, and will surely watch it sooner rather than later.