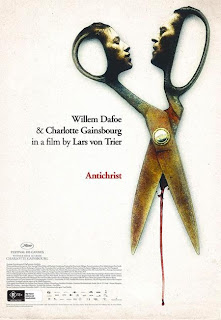 Antichrist might not be Lars von Trier’s best movie, but it might just be the one he would like to be remembered by. This movie has world cinema’s enfant terrible at his most unapologetically and unflinchingly provocative – a movie that has divided the house right down the middle. Technically the movie belongs in the horror genre; but any work by the Danish provocateur never really sticks to any genre conventions, in the same way that he gives the feather to the fact that moralists love to scorn him, as here, for his disturbing, often shocking, and at times even outrageous display of explicit sexual content, violence, nihilism, and misogyny (the latter, quite inappropriately, always seems to be stuck to his movies). Yet, for all its detractors, the movie is also an audacious, angry, disturbing wildly inventive, and even deeply poetic exposition and unraveling of the darkest corners of the human psyche. In fact, the movie’s prologue, shot in slow-mo black-and-whites, was to me filmmaking at its most ravishingly beautiful and devastating. Charlotte Gainsbourg, as a woman inconsolably grieving her infant son’s death, and William Defoe, as a psychotherapist and her not-so-grieving husband who takes his wife on as his patient, are fearless and brilliant. As a reviewer rightly put it, Antichrist is a movie that is to be experienced rather than explained. And that, had Alfred Hitchcock been alive, he would have loved to make this movie himself.

I respect Trier's decision to make such a personal film: it's the equivilent of his nervous breakdown for all the world to see. This will probably make my 2009 Top Ten list but it's not quite a Great film. I can't wait to see what he makes next.

Alex stole the words out of my mouth. And my favorite poster of the year...

@Alex: I agree completely. Anitchrist wouldn't rank as a great work of art. But as you said, it might be the movie closest to Triar's heart. Apparently the movie helped to get a grip over his depression. Take that!!!

@JAFB: Yeah, this is one hell of an awesome poster.

Well, I gave this film a superlative assessment myself as well, and it certainly does contend to make my Top Ten list, though I'm not yet sure whether it will be there or among the excellent honorable mention shortlist. DOGVILLE and DANCER IN THE DARK for me are Von Trier's masterpieces, and both were my #1 films of their respective years, but ANTICHRIST and BREAKING THE WAVES are great and important works.
The fact that I saw this and appreciated as much as I did at a time of family tragedy, speaks for his artistry rather than it's terrible world view.
You really nailed it here Shubhajit:

"Yet, for all its detractors, the movie is also an audacious, angry, disturbing wildly inventive, and even deeply poetic exposition and unraveling of the darkest corners of the human psyche."

Great description too of that stunning prologue, which ranks with the resturant scene in 35 SHOTS OF RUM, the lecture finale of POLICE, ADJECTIVE, the scrapbook sequence in Pixar's UP and the letter in the purple field of flowers scene in BRIGHT STAR (as well as a few sequences in AVATAR)as one of the most magnificent scenes in cinema for 2009.

Thanks a lot Sam for sharing some more about your empathy for and association with this movie despite negative comments running amok about it. I hope my words do not sound crass when I say that movie has the ability to a devastating viewing experience for someone in deep grief.

Yes indeed, the opening sequence in the movie is something to savour for all its visual beauty and latent brutality.