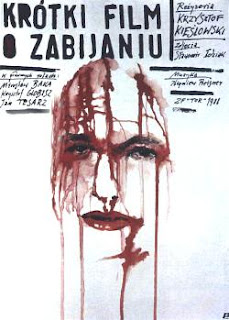 An expansion of the fifth episode of his legendary ten-part miniseries Decalogue, Polish master Krzysztof Kieslowski’s A Short Film About Killing is based on the Commandment “Thou Shalt Not Kill”. I have seen my fair share of disconcerting movies, but rarely one as incredibly dark or as immensely disturbing as this one. Like its companion piece A Short Film About Love, the movie's basic premise is simple – a young, mysterious and eerily psychotic drifter , for no apparent reason or provocation, brutally murders a middle-aged cab driver, and thus ends up getting sentenced to death and executed by the Polish state despite a valiant attempt by a young, idealistic and neophyte lawyer. The movie starts off with the shocking and deeply foreboding images of dead rats and a cat hanging by the neck – a brilliant yet subtle indication of the story ahead; thus, by the time we have been introduced to the three main players of the story, we know they are on a collision course (though not necessarily destructive). Kieslowski took a direct stance against capital punishment here. However, one doesn’t really have to endorse his strong socio-political views in order to appreciate the thematic relevance, artistic excellence and technical virtuosity of this powerful movie.

Well, what can you say about this film; bleak, despairing but so vital. I remember watching this years back but I have never been able to revisit the film because it is so hard to watch. It edges close to being labelled as a documentary. I personally think the humanist/spiritual tone of his films are the closest a director came to Bresson.

I love Kieslowski. The Decalogue was brilliant, as well as the Three Colors Trilogy. He has such an interesting way of communicating through the camera.

I have seen only the Dekalog episode and its brutal, to say the least.

@Omar: Great that you mentioned that the movie "edges close to being labeled as a documentary". The fact that Kieslowski started his career as a documentary filmmaker does show in the cinema verite techniques he used to capture the mundane, ordinariness of life. And yeah, I too have a feeling I won't be revisiting the movie anytime soon :)

@Meredith: I agree. The years he spent in making documentaries, plus the fact that he lived in a 'socialist' country during the Cold War era, enabled him to get the right balance between subtle observations & profundity in his works.

@Srikanth: Yeah, brutal this certainly is.

It's a deeply disturbing and nightmarish piece that certainly can't easily be shaken, but it displays Kieslowski's dramatic and observational brilliance throughout. KILLING is arguably the greatest component of the DECALOGUE, with LOVE second. And I also buy that documentary proposition. it's really a kind of cinema verite.

When I fist saw this film, as an ardent opponent of capital punishment I was even more emotionally affected.

Thanks Sam. Well, given your opposition towards capital punishment, I can appreciate how much the movie must have affected you. As one critic observed (don't remember where), Dead Man Walking might not inspire one to abolish capital punishment, but this one might just.

However, as I mentioned in the review, the emotional & psychological depth in the movie ensured that, even someone like me who isn't necessarily opposed to capital punishment, would find the movie a wonderful work of art. In lesser hands, the movie might have come across as preachy or as a propaganda movie. And that's what made Kielowski the genius that he was.

I have yet to see the full film, only the segment of his DECALOGUE. Working in Law Enforcement, I see crimes like this too often (once is too often...) and you're absolutely correct, in lesser hands this could have been "preachy" or drowned in polemic. Kieslowski is one of my favorite directors.

Thanks a lot for your insights Alex. Your opinion is much appreciated, as also your sharing your personal connect with what's shown in the movie. With each movie of his that I watch, my admiration of Kieslowski too is growing at an alarmingly fast rate.