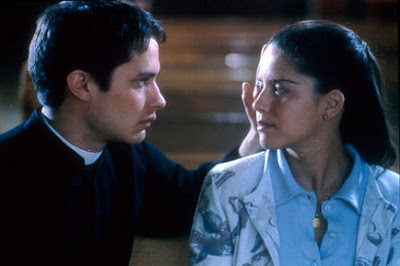 El Crimen Del Padre Amaro is on a topic that is as complex as it is controversial. The movie concerns with the subject of the fundamentalist and sanctimonious nature of religious (here, Christian) pastors and priests, and this, despite the hypocrisy, corruption, power politics and moral decadence within the Catholic Church. Mexican superstar Gael Garcia Bernal has starred as a young priest who is sent to a small ultra-religious town as part of his training. There he falls for the nubile daughter of a lady, who in turn is having a secret affair with the ageing Padre under whose tutelage he has been placed. The director certainly had the guts to tackle such a subject head-on without diluting any of its contents. However, where considerable subtlety and a more matured storytelling was of utmost essence, the director opted for an overtly brazen approach to ensure that his polemic doesn’t get lost on his viewers. Thus, even though the movie was reasonably engaging to watch, and the social milieu of Mexico too was quite well captured, for me it failed to be the thought-provoking movie capable of creating a lasting impression that I’d eagerly hoped it would be. The acting, too, was mostly amateurish, with the exception of a handful of the older members of the cast.

I liked this film more than you did Shubhajit, but I'll agree it's no kind of masterpiece by a longshot. The lead performance is most engaging and the pulpy drama plays out with that hidden polemic still most evident in the climax. Yes, the locales are persuasively rendered and the film is emotionally resonant, already its events seem rather dated to me. But as drama it does work, mainly because of the fine acting and writing.

Well, the movie had a lot to offer as far as I feel. The diatribe could have been expressed a bit more subtly, as that would have made it a lot more effective. And well, I found the performances of the female lead as well as the guy who plays a journo, too amateurish. In fact, as far as Bernal goes, I'd have loved to see the kind of complex emotional dilemma that the role so required - the feeling of being torn apart by fierce belief on one hand and rationale judgment on the other. Instead, his character comes off as a rather opportunist on quite a few occasions. At the end of the day, I'm not calling it a bad film. Its just that I was disappointed vis-a-vis what I'd hoped for.