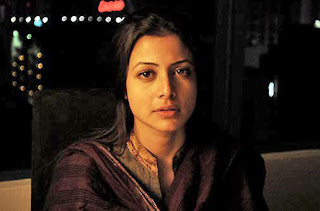 Hit List, Sandip Ray’s first foray outside “Feluda” movies (adapted from stories written by his late father Satyajit Ray) since the wonderful Nishijapon, has yielded, at best, mixed results. The movie was touted as a thriller, and it opens quite spectacularly with a murder that is almost Hitchcockian in its fine buildup. However, it would be more prudent to consider the movie as a psychological drama reminiscent of lowbrow film noirs – yeah, those iconic low-angle shots are there in plenty. The executive director of an advertising agency, on unraveling a corrupt deal by four colleagues of his, get bumped off and his body disposed such that his death looks like a case of drunken driving. However, as the saying goes, “Hell hath no fury like a woman scorned”, his lovely wife (played with surprising élan by Koel Mallick), who is bloody pissed off, decides to get even-steven with the scot-free culprits. The acting is decent throughout if not spectacular; Saheb Chatterjee was especially impressive, though Dhritiman Chatterjee, in my opinion, was wasted. Perhaps a whodunit structure might have worked better as the similarly styled (though far superior) Shubho Mahurat, by Rituparno Ghosh, did. Agreed, the movie didn’t manage to match our high expectations – in that sense it’s a disappointment. However, despite a few loopholes here and there, I wouldn’t be so highbrow as to call it a failure.

Sounds interesting this one - did this get a mainstream release? And I have to admit that I was unaware that Ray's son was busy at work as a film maker - what has his career been like?

Yes, it did get a mainstream releases (it released last Friday).

Sandip Ray, like his father, writes screenplay & gives music to his movies apart from directing them. He doesn't make many movies, and in the last couple of years he has devoted his energy to adapting Feluda-novels written by his father, with mixed results (he has never managed to reach the brilliance of Sonar Kella & Joi Baba Felunath). However, the 3 Feluda feature films by Sandip Ray have been enormous hits.

In fact, in the 90's, he adapted a number Feluda-novels as well as other short stories written by Ray, for the TV - and I used to find them really interesting. They were in fact a huge hit with the audience in Bengal.

Among his non-Feluda movies, I'd strongly suggest you watch his Nishijapon - it was a psychological drama & I really liked the movie. His Uttaran (which his father was supposed to direct but couldn't due to failing health) won him a national award, and his Goopy Bagha Phirey Elo (the 3rd in the Goopy-Bagha franchise, the 1st 2 were made by his father) was again quite popular but never scaled the heights reached by the earlier 2. His most famous movie (from a critical standpoint), however, remains his debut feature - Phatik Chand, which again I would suggest you watch.

Thanks; comprehensive feedback. I was unaware that such a vast and rich sub culture existed around feluda. I will track down some of these especially Phatik Chand.

Well, to give you a simple analogy, Feluda is to Bengalis what Harry Potter is to the rest of the world - the Ray character is that popular and loved by educated Bengalis. In fact, only Saradindu Bandopadhyay's Byomkesh Bakshi can give Feluda competition in terms of popularity of literary characters. Ray's Professor Shonku too is very popular, though not as much.

Altho, I liked Babul best compared to the three idiots(pun intended) for his short, interesting stint...and a fast death.

Yeah, well said. And I guess, Saheb's character had the cruelest possible death of 'em all ;)