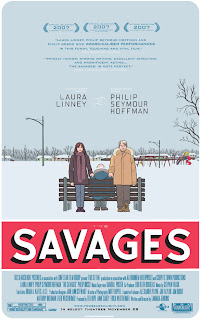 American Indie director Tamara Jenkin’s first movie in 7 years, The Savages is based on a deceptively simple and a seemingly drab premise – a pair of siblings coming together to take care of their aged father suffering from dementia. But with two of ’s most respected actors playing the emotionally fragile siblings – Phillip Seymour Hoffman and Laura Linney, things can never really go wrong. Hoffman’s intellectual ‘brother’ and Linney’s ‘sister’ who aspires to reach the same pedestal, have brought to screen a ravaging relationship, seethed in jealousy, insecurity and a bagful of personal issues trying to burst through manicured seams. And when they finally let their guards down and start speaking their minds, you know the proverbial shit has truly hit the walls, err fan (watch the movie, and you’ll get the pun). The script, which is compassionate and disturbing in equal measures, lent an extra spark to the compelling performances. Even though the first half of the movie is filled with some eye-candy montages (the saturated colours and locales deliberately made to look like movie sets are reminiscent of similar sequences in The Notorious Bettie Page), the tale of human mortality, broken relationships and fractured dreams is anything but a date movie.

hey i saw changeling a while ago.. the movie was one of clint's best.. (if you leave out unforgotten - its always his best - I am western freak)you should try it out.....

Yeah, I too have heard positive reviews of Changeling. Will watch it soon.

By the way, when you speak of Clint Eastwood's best directorial ventures, I feel another movie should come into the picture apart from Unforgiven - the brilliant Mystic River.

Given two of my favorite actors here, I expected more. Honestly, I think it's the script that fails, just didn't excite me, felt it was drab at best. Oh well ... no biggie.

I think thats being a bit unfair to the movie. Yes, the script isn't what I'd call spectacular. On the contrary, thanks to the mundane detailing and subtle penetrative observations we manage to get an extremely realistic picture of the characters - making the story that much more grim. The director perhaps went for a low-key script so that great performances can be extracted from the two actors but not in an obvious kind of way.

I don't like to just stop by in disagreement but I watched this again (in a Super-8 motel room at 4:00 AM in Laramie, Wyoming) and it just didn't grab me. Hoffman and Linney, imagine them in something with a little more ... well, something more interesting. I don't think good dialog (and there is plenty of it here) necessarily makes a good story.

btw - awaiting your "Changling" review. For a 'based on a true story' film, it has one of the most impossibly unbelievable characters I've ever seen. Bothered me a lot.

Well, all I can say is, to each is own. I understand this isn't the kind of movie that would impress everyone because there isn't anything spectacular about it. I liked the movie, but it didn't appeal to you. Interestingly, the same reasons that made the movie seem very good to me, made it seem drab to you.

I have Changeling lying with me, but somehow I haven't yet ended up watching it. You say its good?

Jolie does a fine job, and it has that Clint feel, but if you think the cops in "Chaser" were absurd wait till you encounter them in "Changeling." The police chief is so intolerable I had to keep telling myself it is supposed to be based on fact in order to get through it.

After Gran Torino, I began to wonder about Clint's use of absurd caricatures as characters.

This is way off topic, but have you seen "Let the Right One In"? I've decided that it and Synecdoche, New York were the best films of 2008.

Thanks to your review of Gran Torino at your blog, I've kept myself away from movie! And now you're telling me to keep away from Changeling as well ;)

Well haven't seen either. I've been wanting to get hold of Synecdoche for sometime now, but for some reason or other it hasn't happened. As for Let the Right One In, its a horror movie right? The last really good American horror movie I saw was, I guess, Exorcism of Emily Rose.

I feel bad writing negative reviews. You've read enough of my stuff to know I like to pump up certain aspects of movies I don't like to try and be fair (or confusing) concerning final judgement. I can't stop myself from disliking some movies but I'd rather persuade than dissuade. Clint E isn't some hack with an ill conceit that makes you want to throw rocks at him. A lot of people like "Gran Torino" and "Changeling". Let them roll into your queue more slowly than others. How about we just say that?

Remember my line about 'foreign' films using foreign actors? "Let the Right One In" is a Swedish film that rests on the shoulders of two thirteen year old kids who are nothing like the kids you see in Hollywood horror. It's a touching adolescent love story primarily. It's got some gory moments relating to vampirism, but it's a sublimely sweet film in essence. It's tough to apply the term horror to it. It's not the kind of film I think you would ordinarily chase down but I think it is well done enough that you would appreciate it.

no, THIS is my favorite movie of all times! ;)