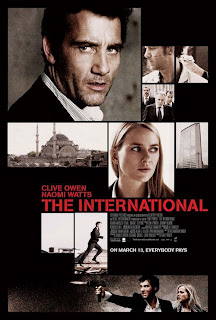 We saw the latest from Tom “Run Lola Run” Tykwer, The International, at a theatre with poor sound quality. This proved to be doubly unfortunate because, in contrast to what we had presumed, it is a verbose thriller with an exceedingly meandering plot. On first glance, the tale of a super-rich bank playing the role of a vital keg in promoting international terrorism and chaos might seem straight out of a Robert Ludlum thriller, and hence ticket to a perfect summer popcorn-churner. Perhaps precisely for that reason, the director tried raising the movie a couple of notches above the daily diet of slick thrillers by adding complex layers of corruption, deceit and conspiracies – that too on a mega-global scale. Unfortunately much of it failed to make sense, and to top that it failed to thrill as well, apart from the bloody Guggenheim shootout scene that is. Naomi Watts, who is compelling as always in the role of an asst. DA, and the polished vistas of places ranging from to to to , are perhaps among the few positives for the movie. Clive Owen, though an Interpol agent, never really seemed capable of kicking the bad guys’ asses, and the loose script too didn’t help Tykwer’s ambitious causes.

I like these two leads a lot but I think I'll take a hint and give this one a pass. I'm afraid this might be the action film equivalent of "The Savages" ... ;)

Yeah I too am a big admirer of Naomi Watts. So that movie was that much more a disappointment for me. As for the comparison with Savages, I'll act as if I didn't read that line :)

I should have listened. I actually thought it was ok until the final act. Then, well ... I simply got lost. I couldn't tell who the bad guys were anymore. And then it just ended. My small brain, perhaps, but I felt like the rug was just pulled out from underneath me. I was liking it, I got lost, I ended up hating it. I can see no reason to recommend the film.