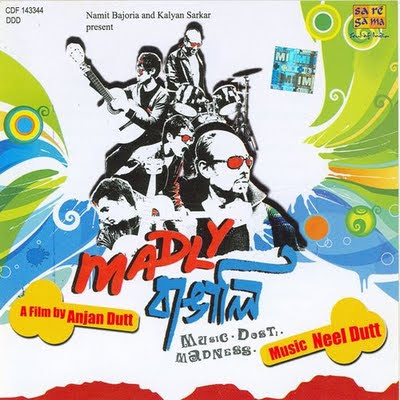 Anjan Dutt, one of my favourite troubadours, has finally become his own man as a filmmaker, and in glorious fashion. Bow Barracks Forever was good film albeit for a niche audience; Bong Connection and Chalo, Lets Go showed promise, but didn’t really deliver as much. With Madly Bengali he has created a movie that is as much filled with nostalgia as it is with humour. The movie is broken into 4 chapters, with each dedicated, in turns, to one the four members of the eponymous Bengali rock band – Pablo, Benzy, Neon and Baaji, struggling to make music in a world full of noise. Though distinct in character and background, and each with a baggage of his own, they however are united by friendship and their common passion for music. Set against themes ranging from marital problems and religion to juvenile sex and drug abuse, the movie indeed manages to capture the pulse of today’s Kolkata. The songs composed by Neel Dutt, the director’s son, are absolutely terrific - ranging from edgy to elegiac, more so given that music is essentially what the movie is all about. And whenever the beautiful vignettes of the city made me a tad sentimental, the awesome screenplay, replete with dry humour as well as good situational comedy, had me laughing like a maniac. The director himself has played a pivotal role as a drifter who becomes the band’s manager-cum-mentor. Lew Hilt, as a former musician and the owner of a dilapidated garage where the band jams, Chandan Sen, as a foul-mouthed local goon, and Saswata Chatterjee, as an alcoholic father, are really good in the acting department. The movie has its negatives, I agree, but the positives outweigh them handsomely, making this a far more definitive chronicle of the underground rock culture in vis-à-vis the Hindi flick Rock On.

Dude, you just shud have added the "Baburamer muuter gondho" and "Ponde cellotape" dialogues, however profane it might have been!! ;)

I know, they are two of the most hilarious dialogues I've heard in a long time. Can't remember the last time I laughed so much!!!

glad to have read this review. am planning to watch ths movie.

Computer Society International said...
This comment has been removed by the author.
31 May 2009 at 19:36

Yeah, do go ahead and watch the movie. And do let me know if your views agree with mine.

I saw this movie - wonderful. It just flows in with a lot of energy. Each cast member - young and experienced, blends in with the movie seamlessly. The use of color in this movie was quite interesting. The songs were refreshing. I hope tho' that the kids out there don't view the juvenile sex and drugs and cigarettes as something glorified.
One question (spoiler alert) - towards the end who were the established musicians referring to when they were mentioning someone with drug problems?

Yeah, I agree with you. Even when the acting of the guy who played Pablo seemed a bit over the top, I felt it went perfectly with the character. In fact each of the 4 characters have been very well delineated. And the music was absolutely awesome.

As for your question, I think they were referring to the guy (the name of his character was Neon, I guess) with the alcoholic father. The one shown lying at road side at the end.

We saw life of four boys. We also life and family of Joy (Benji's GF). But the story line missing the part of Taniya. Beside a short scholarship debate with their parents, we missed the family life of Taniya. I also cannot understand whats the need of Supriya Devi's character in that film

See, just because a movie has say 10 characters, it doesn't mean that each of those 10 characters have to be delved into in detail. The side or fringe characters play the role of either plot developing or revelation of certain aspects of other characters.

Tanya's story played an integral part in the maturity of Pablo's character. And the spark to that was provided by her father wanting her to pursue further studies abroad.

Supriya Devi's character, on the other hand, was instrumental in letting us know the reasons for Anjan Dutt to spend all his time at a friend's garage - to escape bad memories of a sordid past family life. Her character also explained the reasons for his having left home and lead the life of a 'baunduley' or a rootless vagabond, despite their huge family wealth. The fact that Supriya's character is a dominating one was also evident in those scenes - perhaps another aspect that he wanted to escape from, given his free soul.

That's a great way of putting it, and I absolutely agree with you. In fact, there was a certain method to the madness depicted in the movie - which in itself is a wonderful thing.

Welcome to the club. It seems it isn't an exclusive one anymore :)

I really loved this movie from the core of my heart..execellent mixture of comedy, romance, and there was a lot of element of frendship in this movie..this movie has also talked a lot abt todays generation and the youth...thats y the movie was greatly njoyed not only by the teenagers but also by oldies...i have watched it thrice and still wanna watch it.....hats off to Anjan Dutta for making such a gr8 movie...excellent direction and ya the whole roup of TIN CAN was amazing..i loved BENJIE..

Yeah, nice movie this one. Dutt really managed to connect with his target audience, including yours truly.

your favourite troubadour maybe ..
but he's so fixated on Dylan ...
and a poster in neon's room seemed incongruent to me

In the beginning spelling of "Fetsu" was wrong......Better don't write it or write it properly..... Nice movie .... Songs are damn good...... Few guys acted as they are playing in a drama not a movie.... but anjan dutta was awesome ...salute to rupam and nachiketa as well.... thanx a lot for a good movie.

All I can say to that is, my review of the movie is proof enough that my views do not agree with yours. By the way, bangla-e likhle kibhabe?

Really, a fantastic movie...!!! Would really be one movie close to the heart of Calcutta (now Kolkata). Really loved the essence...!!!