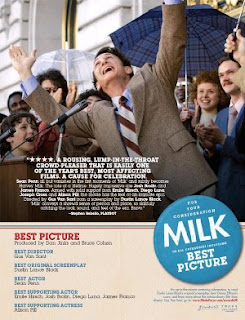 American Indie auteur Gus Van Sant and actor par excellence Sean Penn have joined hands to bring to screen the last few years of Harvey Milk, the first openly gay person elected to public office in the United States. Though an underdog story at heart, Milk has managed to rise beyond the clichés and pitfalls that most such movies fall prey to. In Van Sant’s expert yet sympathetic hands, it hasn’t just remained the heroic albeit tragic final eight years of Milk’s life – from his relocation from NYC to Frisco to find greater meaning to his mundane life, to his assassination at the hands of a political rival – but also a holistic look at the socio-politics of the gay rights movement as well as the bigotry, hypocrisy and downright prejudices that had always plagued the lives of Milk and his ilk. As one might expect, the movie is an out and out Sean Penn vehicle – his nuanced, heartfelt portrayal of an average middle-aged closet gay who makes a spectacular transitions into a larger than life figure is brilliant. He has received apt support from James Franco, Emile Hirsch and Josh Brolin. Though I would have loved to see a more rounded character development for Milk since no man, however revered, can be devoid of shades of gray, this poignant old-fashioned biopic, nonetheless, has managed to effectively capture the zeitgeist of the turbulent 70’s.

thanks for the thumbs up, i was wondering if i should spend 2 hours on this movie.

Yeah, I was kinda hoping someone would comment on that... Couldn't resist myself from concocting that phrase - there wasn't any malice intended though ;)

Yeah you're right about Franco - an underrated actor he is. The sad look in his eyes every time his character met Milk (after their breakup) had an extra layer of poignancy to their relationship.

Another disappointing film for me this year... Apart from the performaces, I thought Van Sant once again contradicts himself in the film...