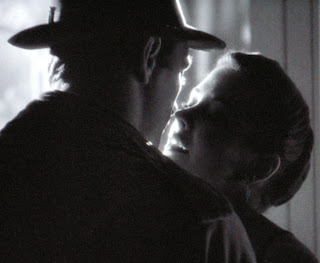 Film noir enthusiasts often agree that if one movie were to be selected to define the genre, it would have to be Jacques Tourneur’s Out of the Past. As a critic so succinctly put it, “With its doomed anti-hero, conniving villain, sardonic script, moody black-and-white photography, and icy femme fatale”, Out of the Past “is essential film noir.” World-weary former gumshoe, now running a gas store in a small town and settled in a stable relationship with a local girl, finds the hard way (in a manner quite akin to A History of Violence) that one can not really shake off one’s dark past, as he gets thrown into a web of deceit, double crosses and murder. Robert Mitchum, in one of his earlier starring roles, is quite magnificent as the tragic anti-hero; Kirk Douglas’ turn as an unctuous and creepy gangster is a terrific indicator of his volatile energy and a great precursor to his amazing performance in An Ace in the Hole. The pivot for the plot, though, is the beautiful Jane Greer, whose femme fatale in the garb of a damsel in distress takes the two guys for a ride and makes big-time suckers out of them. Though quite surprisingly for a film noir the narrative isn’t in the first person (except in the extremely well crafted flashback sequence), cynical and hard-edged dialogues, the taut and twisting storyline and an inexorably gloomy atmosphere, nonetheless, have made this brilliantly photographed classic a seminal and quintessential case study for this iconic genre.

Good choice! This is possibly third on my all-time Hollywood list and no 1 as a romance. More than anything, it is a justification of the strength of the studio system. Jacques Tourneur made his name on Val Lewton's famous B picture unit at RKO and the writer Daniel Mainwaring was a seasoned Hollywood pro (under a range of names). I'm not sure about your claim that it was Mitchum's "first starring role". His biggest so far, perhaps, but by 1947 he was a well-known star at RKO – as the man with "go to bed eyes" as my aunt used to say.

Thanks. The movie indeed has the ability to catch one by one's lapels. A wonderful film noir, it really had everything that the wonderful genre has to offer.

As for this being Mitchum's first starring role, well, this was what the net had me believe. Apparently he was no more than a fringe player in supporting roles before this one.

Try William Wellman's The Story of GI Joe (1945), The Locket (1946) and two earlier films from 1947 -- Raoul Walsh's noir Western, Pursued and Edward Dmytryk's 'social issue-based' noir Crossfire. They are all very good and Mitchum's name is on the poster for all of them. Out of the Past was about his 30th film – they made a lot in the studio period!

Was he the lead actor in the movies you mentioned?

Sorry not to reply earlier. Yes, he was one of the two or three leads in each of these pictures.

Ok, my mistake then. Thanks for pointing it out. I've made the necessary change in the post.