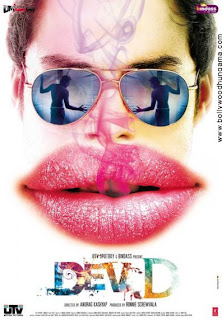 Platonic love is passé; today’s Devdas watches porn, snorts coke, gulps Vodka and gets laid. Anurag Kashyap’s Dev D is as much a love story as Burn after Reading was a spy movie. This is an irreverent, madcap, and psychedelic ride through the kind of quirky filmmaking championed by the likes of Quentin Tarantino and the Coen Bros. The classic tale of doomed romance and the destruction inflicted upon himself by a tragic hero has attained darkly funny and remarkably visceral proportions in the non-conformist hands of the maverick director. The visuals have been brilliantly juxtaposed with the inner-workings of the protagonist’s mind and the complex chemistry he shares with his childhood sweetheart and a hooker, and would remind one of such “addictive” movies as Trainspotting and Requiem for a Dream on one hand, and Christopher Doyle’s iconic montages in Wong Kar-Wai films on the other. The acting is quite good, especially with Abhay Deol putting in a remarkably restrained performance in a role that was tailor-made for histrionics. The real star of the movie, however, is the awesome funk-rock soundtrack the kind of which has rarely, if ever, been heard in Hindi movies. The auteur (yes, he can be called one) deserves kudos for having the guts to make a no-holes-barred, kick-ass movie like this; my friends and I had a blast watching it as I’m sure he had while making it. And those of you who feel that Karan Johar is the greatest filmmaker in Bombay today, I'm sure you already know that you aren't really fit to watch Dev D.

Dev D is a treat to watch. Hypocrisy, Identity crisis, emotional shocks are part of this dark journey of Dev's life.It represents a generation searching for an alien identity in the society.Inability of Dev to attach itself to anything is well documented by anurag in this movie.Self destruction mode at its best Indian context. Soundtrack,camera work and dialogues are superb.Amit Trivedi is really in AK'sword Poor man's Raheman.Characters are not justified on the basis of ethics is greatest achievment of the film.

I was waiting for this review SL. Dev D is one of the most brilliant movies made in hindi in recent times. Abhay D surpassed all my expectations even though i've watched Manorama 6ft under and oye lucky lucky oye.
but you didn't say anything about the girl who played chanda. that was a minefield of a role, immense oppurtinity to ham it up, but she underplayed it beautifully and didn't blow up even once.
i loved the crazy use of music, crazy camera work, crazy crazy humour. totally explosive movie. I'm going again tomorrow!

A ride on Coke; high on life! A film which gives a flying f**k, to the oh-so-Hindi-filmy ethical bahus, running around trees,doe-eyed(often with other unethical purushes), and with their fairytale endings and garish dance sequences!!
Anurag, yoh d mahn \m/

@Yayaver - Yeah, absolutely. I loved Dev D for being such a non-conformist movie. Kashyap had loads of guts in making a Hindi movie like this. And yeah, the music was really amazing.

@Little Girl Lost - Abhay Deol was quite good. And interestingly this was the first movie starring him that I've watched. I wasn't that impressed with the girl who played Chanda, though she was notice worthy. So was the other girl who played Paro. Enjoy your second viewing.

@Sthito - Abso-f*****g-lutely. Dev D is a slap in the face and a kick in the arse for most of Kashyap's fellow directors in Bollywood - people who are more interested in commerce as compared to arts.

Your analysis griiping me with an urge to see the movie..

Let me helm Kashyap as the new czar of indian motion picture extravaganza.

@Subhadip - Thanks. Yes, I do want people to watch Dev D.

@Adrenaline - Well, I wouldn't yet crown him as the 'czar of Indian cinema'. But yes, he could easily be the most maverick Indian director working today.

@All - The original classic has been musch humiliated in recent times. This was one hard hit to those culprits. Atleast, one thing is for sure. No other director in future will ever dare to make a remake on this classic.

Hail to both Anurag Kashayap and Amit Trivedi. Our hunger hasn't died out yet. We are expecting more masterpieces of this kind.

@Abhrajit - You've made a terrific point, and I couldn't agree with your more. People like Sanjay Leela Bhansali, that self-pretentious rat who thinks he is the greatest thing that happened to world cinema since the invention of movie camera, when in reality he is anything but, will never dare make a mindless kitsch like he did with his adaptation of the classic novel. I have a feeling that had Saratchandra Chattopadhyay been alive, he would have been appreciated Kashyap's radical take on his work.

With movies like Black Friday and No Smoking, the director had nothing more to prove himself. These movies along with Dev.D has set such a high expectation level, that we have nothing to say other than "MORE" to satisfy our expectations.

dude...i completely agree...wat a rocking movie...but a restrained performance?? i thgt dats how much abhay deol can go anyway! restrained would be manorama...or over excited would be aahista aahista...i thk he's done jus wat was required of him...

You're right, Abhay Deol did what was expected of him. As I mentioned in the review, the role was tailor-made for histrionics, and in that perspective, his performance was indeed remarkably restrained - that's what my opinion is.

Kashyap is the mashal-e-rah who is leading the bollywood to its new era.. (thanx to rgv who hand-picked kashyap for Satya).

BTW, I second you on your take on SLB.

Thanks a lot Praxit for the good words. I didn't know Kashyap acted as an assistant director to RGV in Satya. That surely explains his conviction, cos RGV (irrespective of how much you dislike him) made some really good movies in his life. And great to know we're on the same page as far as the pretentious & copycat SLB goes.