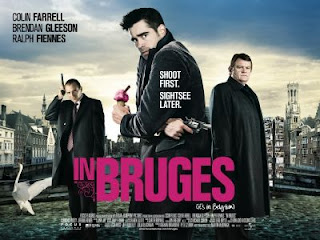 How often do we get to see two hit men sightseeing medieval architecture along the cobbled streets of the quaint Belgian town of ? Well, that’s the way the cookie crumbles in this interesting British movie called In Bruges. The best aspect for this movie, I felt, lay in its ability to transcend genres despite seemingly being tailor-made to be a genre movie; the sardonically witty script managed to stray beyond the confines of both thrillers and situational comedies. Waiting for a call from their boss (Ralph Fiennes in a darkly funny role), the two hit men never seem to agree on anything and yet form a strangely beautiful camaraderie. Collin Farrell as a profane and impish assassin and Brendan Gleeson (in a terrific performance) as his fatherly art-loving partner, make a memorable pair. The movie, through the serio-comic exploits of the three men, black humour, moments of great emotional depth, and thrilling cat-and-mouse sequences, has the ability to endear itself to the viewers. And whatever might Farrell’s character repeatedly say, certainly DOES NOT “suck”.

My favorite film of the year...

I couldn't even blink while watching this film. Haven't seen a lot of films that where things come by surprise relentlessly. Unpredictable, ultra-flexible, shocking and all the best adjectives of every genre...

The film works on a much much higher level than meets the eye and somehow the director-writer feels like God, not pretends to.

Only Farrell performance I like. Fiennes is masterful too.

Though nowhere as much you did, I too liked the movie. It did manage to go quite deep without trying too hard. The dark humour was really good; it also managed to be sombre at other times. The best performance, in my opinion, was that of Brendan Gleeson.

But the movie was also preposterous in its political incorrectness. I don't usually give a damn about paying heed to the puritans, but was the midget/dwarf angle really necessary?

Thank you for reviewing this movie which I found delicious (though yes, the political incorrectness bothered me occasionally too)
I was waiting for your take on my nascent attempt at being a film critic. Thanks. I’ve seen Memento (this is why I gave ghajini a miss, no way could it have measured up to it).
Actually, I had heard so many good things about A Wednesday that I guess my expectations were really high. Though it was a compact movie, flabless and fresh in concept, the treatment was occasionally juvenile and this immaturity disappointed me a lot.

should i watch delhi-6?waiting for that review :).

Well, I fet the film was much about politican (in)correctness as it was about others.

The film among others, is also a travel and living film

Farrell is too naive of sorts to ever control himself and commits all the cultural and geographical faux pas right from the first word , opposite to Gleeson who does the act of the perfect tourist.

The film rips apart all those "sensitivities and sensibilities"


And of course, I can sense that you wouldn't care about ethics in films. Any one watching world cinema wouldn't! :)

@Little Girl Lost - Thanks for reading my review. Yes, it was indeed, as you said, a delicious movie. Planning to watch Delhi 6 tomorrow, so hopefully I'll be able to update you on that soon.

@Seventh Art - Point taken. As I'd said earlier, I don't give a damn to the puritans and so-called preservers of ethics and such stuff. That's the reason I prefer a bad guy or anti-hero as compared to a two-dimensional good guy. But then, well, i don't feel very comfortable when someone tries to provoke just for the heck of it. Thats the reason the midget/dwarf angle seemed like a sore finger to me in an otherwise well made film.

As for the travelogue part of the movie, I agree with you in that it is really good. In theory the plot could have occurred in any city. So the director and script writer are that much more laudable for ensuring that Bruges evolves into a vital character in the movie instead of being just another pretty city.

one of my favourite films. definitely a 5/5 from my side.