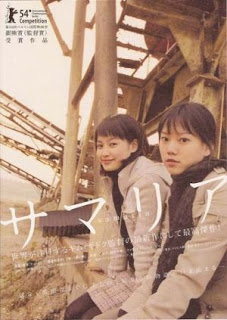 Samaritan Girl, the third movie I watched at this year’s Kolkata Film Festival, is a somber and serious drama directed by Kim Ki-Duk. Even though this is my first experience of the South Korean director, it wasn’t hard to understand why he wins appraisals at international film circuits and courts controversy at his country in the same breath – his nonchalance in tackling subjects that most would want to carefully avoid. Told in three chapters, the movie tells the tale of a young, sensitive girl who leaves aside scruples to earn a quick buck with her close friend, he strange U-turn on her friend’s tragic death, and her final confrontation (a subtle psychological) one with her loving father when her dark secret gets accidentally revealed. The subject has been sensitively handled, and has been infused with a sad, morose tone that acts as a means of juxtaposition for the girl’s existence. However, what could have been a very dark and troubling film, didn’t really have that extra bite to really move or disturb us. This strange tale of lost innocence, redemption, two lonely souls’ attempts at connection with each other and with strangers which were destined to fail from the beginning, and a father’s desperate attempts to come to terms with the shocking revelations about her daughter, is saddening though lacking in profundity.

Casual feedback from other people about this film has been somewhat negative. however, I personally like the generally languid pace of the movie, given a theme which could have turned melodramatic quite easily.

I think it was disturbing enough. because the end was preordained, as in all films of Kim Ki Duk I have seen so far.

It is not much about what is told. It is about how it is told.

The casual, matter-of-fact treatment is what works better, in my opinion.

This one and "The Isle" are my favorite Kim films, I think, because he seems to give himself over to the them somehow rather than controlling them ... if that makes sense.

Your first Kim film, eh? Well just for kicks here's my ratings list for the guy:

5 - Time; Spring, Summer ... etc (The acting in both of these films is atrocious)

2 - The Bow (The guy with the bow has no justification. Bad casting)

I don't want to start any fights, these are just my experiences. ;)

@Dhruva - I agree,to each his own. And I'm surprised by your admiration for this film because it wasn't a ad film by any means. Only, it didn't strike too deep a chord with me.

@Seventh Art - Have noted down your strong suggestion, will surely watch it once I get hold of it.

@Sitenoise - Don't worry i won't start a fight with you :) As i said, to each his own, and this argument is especially valid for the arts. Thanks a lot for providing your rating list for Kim Ki-Duk movies, that should help me a lot. Can't help but express a bit of surprise though; Samaritan Girl is your favourite, 3-Iron (the 2nd Kim movie I saw and whose review I will post shortly) features midway in your list though I liked it, and Bow, about which I've heard a lot of positive opinions, lies right there at the bottom. Seems you have very strong opinions about his movies as the list covers nearly the entire range of the scale. Thanks nonetheless. And do keep the option of fighting in the future, cos that's a lot of fun ;)

It's strange ... first of all, and this has to do with film in general, there is a big difference, I believe, in one's experience of a film if you anticipate it being released and go see it when it comes out, versus going back through someone's oeuvre via DVD or something like that.

I discovered Kim last year and my first Kim film was "Bad Guy". I didn't think too much of it at the time but I knew he was someone whose catalog I wanted to go through. Next was "The Isle" and that just blew me away.

So here's part B of what's strange ... it's hard not to think of one Kim film in relation to how it compares to his others ... and this experience is influenced by the order you see the films in, I think.

I imagine a good majority of people's introduction to Kim is "Spring Summer ..." That's a vastly different starting point than "Bad Guy" or "The Isle" ... not to mention if you are someone who has been following Kim since "Crocodile"!

Once you are a fan you have expectations that are shaped by how you became a fan.

Where was I supposed to go from there?