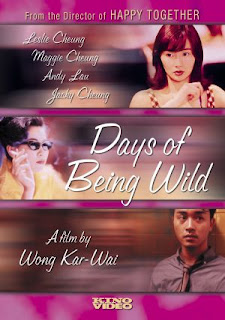 Hong Kong New Wave maestro Wong kar-Wai may easily be called the unofficial spokesperson for the lonely hearts of the world, thanks largely to his staggering trilogy on unrequited love and broken hearts (the brilliant Chungking Express, the psychedelic Fallen Angels, and the poignant In the Mood for Love). But before them, he made this largely unknown but aesthetically beautiful semi-autobiographical film Days of Being Wild – a tale of loss, missed moments, unreciprocated emotions, failed attempts to connect, and loneliness. No one gets what he/she yearns for and ends up with regret, disillusionment, and finally, acceptance. It is marvelously enacted by the protagonists, especially by Leslie Cheung as the severely detached and existentialist protagonist, Maggie Cheung as a soft spoken regular girl, and Carina Lau as a wild, boyish and vibrant dancer. Further, Kar-Wai joined forces for the first time with his famous collaborator, cinematographer Christopher Doyle, and the result isn’t just visually engrossing in its imagery, but also nuanced and haunting in its understated beauty.

Days of Being Wilds is one my favorite Wong Kar Wai film, and it’s significant in more ways than one. First it fostered a long lasting relationship between three individuals that formed a team who experimented with form, style, content of his subsequent films. WKW as director, Doyle as cameraman, and Willam Chang Suk-Ping as his editor/ art deco (although Patrick Tam WKW mentor edited this film), and the set of stock actors who keep recurring in his film and the themes, secondly this movie set up the base for ‘mood’ in the films of wkw where plot per se was not important but the narrative lay in the (music and dialogue) conveyed through set-pieces that feels fragments of a larger and a bigger story. This film was supposed to have a sequel but the disaster caused him to abandon the plans, but WKW returns to the same character and themes in 2046.

The 60s, time, love, memory, longing became an important theme and a recurring motif for WKW and his subsequent film. Days of Being Wild is a movie which clearly evokes such longing. Each of the central characters are longing or in a state of flux for something they themselves are not aware but find it hard to solve or deal with; Lesile Chung for his mother, Maggie Cheung for Leslie, Claria Lua for Lesile and Andy Lau keeps thinking about his encounter with Maggie. Wong Kar Wai begins with a metaphor on time and almost ends it with the question of memory. What I like about his movies is that his characters even though never organically grow within films, but he weaves such a mood (colors and music) that they seem to be developing step by step in emotions, in thought and in feeling. For example, the scene where Andy Lau is standing near the telephone booth and the music plays, and all WKW does his use an important voice- over one can see the basic mise-en-scene of his films (rich colors, melancholic music, narrative voice-over, and a very observant camera movement+ framing that shows bond and displacement between subject and space.)

I think what has made WKW tick over the years with his maturation as director coming onscreen with In the Mood for Love and exhausting by the time it reached My Buleberry night is that WKW set up a mood unlike any other director on the planet. One can pick out pieces from his film and simply places them as a piece of video and it would seem coherent. Later on his style did mature a lot as a director using various motifs (dialogue, characters, themes, and colors) to keep us stuck in the moment much like the character.

Although I loved Days of Being Wild but Happy Together till date remains my favorite WKW film, even if, I have a soft corner for 2046.

Thanks for your comment. That could very well be a piece in itself.

Indeed WKW's greatest ability lies in his ability to make his viewers feel those unstated words and those unexpressed emotions. His movies deal with loneliness and grief, yet he never borders on melodrama or verbose dialogues. Off-the-cuff remarks, small gestures, perfectly devised camera angles, impressionistic usage of colours and locales - these are some of the stuff he uses (not in an obvious way) to reveal and capture the nuances and delicacies of the play between the characters. Consequently his characters as are as much people of flesh and a complex array of psychological perspectives, as they are a direct product of their times and the place where they reside.

Personally, my favourite WKW movie is Chungking Express. The kind of human factors he explored in Days of Being Wild, reached mesmerizing levels in CK. Unfortunately I haven't watched Happy Together yet, though I've heard a lot of positive things about it.

And speaking of Doyle, I've no hesitation of the over-used epithet 'genius' to describe him. His usage of colours is brilliant. He is fascinating when he goes over the top, but he is equally effective when he keeps things simple and understated. And his greatest strength lies in his ability to complement the director's vision. But perhaps therein lies WKW's talent.