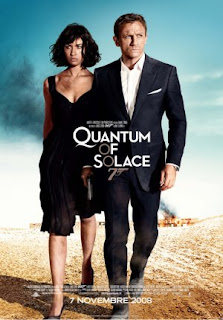 Based on a little known short story by Ian Fleming, Quantum of Solace could have easily become a great spy movie – what with the inner turmoil of an otherwise brilliant agent, and a fair share of megalomaniacs and red hot damsels in distress. Unfortunately, while what the director perhaps wanted to make was an unglamourized spy thriller in the same veins of maybe something like or The Conversation, where the human story is more important than spectacular car chases, the money-crazy monster of and big production houses refused to bulge. So instead what we have is a bit of hotch-potch – a little of this and a little of that without one complementing the other. Thankfully, the day was rescued to some extent by Daniel Craig, in his follow-up to Casino Royale. I won’t go into the longest running debate among the aficionados of Double-O-Seven regarding the greatest Bond ever, but suffice it to say that what Craig has managed in accomplishing is quite exceptional. Bond still loves his Martinis, babes and fast cars all right; but in place of the suave, wise-cracking gentleman-agent who could beat all those goons without having a crease develop in his dinner jacket, what we instead have is a bruised and battered spy who’d rather avenge the death of his love than follow procedures in the line of duty.