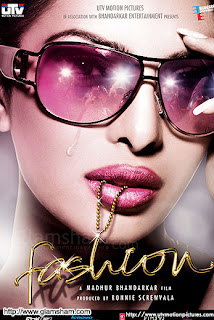 Fashion, the latest outing from Madhur Bhandarkar, the self-proclaimed maker of “realistic cinema”, is a behind the scene look at the glitz and glamour of the high-flying fashion world. The grimy, ultra-competitive, and at times ugly dog-eat-dog world presented with unflinching honesty is commendable. Even though the time-line seems disjointed at times, the dialogues in a few scenes borders on the clichéd and formulaic tracks, and the character developments and transitions aren’t always smooth, Bhandarkar deserves kudos for holding his own against Bollywood’s dream factory by not sugar-coating the uncomfortable elements and the dark underbelly of life on the fast lane which comes tagged with the industry of size-zero figures, mercurial fame and quick buck. Priyanka Chopra has given a sterling and extremely believable performance as Meghna, an ambitious small town girl who experiences a meteoric rise to fame and an equally spectacular fall from it. Kangana Ranaut (Woh Lamhe) is alluring, though a bit over-the-top, as a coke-snorting, emotionally fragile queen of the ramp, whose complex by-the-sword life is a sort of déjà vu for the audience vis-à-vis Meghna; however, her denouement is far more brutal and sad. The theme tune of the movie, too, strikes a chord.

I have never understood and keep failing to understand the usage of term ' realism' in cinema these days by our Bollywood fraternity. Realism and Research the two new bastardized fads of our cinema. One day, seriously, they should be questioned regarding their views on realism whether it’s a representation they talking about, the imitation they talking about or simply copying.


I seriously never could understand the sugar coating ' realistic' as critics and people put brand of Bhanderkar cinema, if Bhanderkar was realistic I wonder what did filmmaker like Jean Rouch did or even Shymam Benegal.

That's an excellent point you've raised, and I completely agree with you. In Bollywood, specifically, realism has become the latest in the series of moronic cliches that half-baked filmmakers love using. When Karan Johar made Kabhi Alvida Na kehna, he started boasting everywhere that this is a realist movie, despite it being grossly otherwise.

As for Bhandarkar, he operates within the destructive confines of Bollywood, but hasn't sold out. He doesn't hold a candle to people like Satyajit Ray or Martin Scorcese, and neither I'm a fan of his 'talents'. However, thankfully, his movies certainly aren't sugar coated, and not just vis-a-vis his more popular contemporaries. Fashion, though nothing great in terms of sheer artistic value, was at least honest in its depiction of stuffs that it could have easily side stepped in favour of a safer approach.

Of all the things the film artistically/realistically portrayed being discussed, it certainly didn't have two things. A brilliant beginning or an end. The only saving grace was, yes again, realism, deftly shown without making it stark naked like in Page 3(I hope you understand what I mean by that!)and a brilliant, daunting performance by Kangana, as the ephemeral shooting star of the Fashion industry, satisfying the viewers preconceived notion of the "dirty business" of the industry.

Yeah, like i said, a few things about the movie are cliched and formulaic - the been-there-seen-that beginning for one. But the director was courageous to venture places which are anything but formulaic. And Kangana - she may not be the best actress around, but she does have that something which is wild yet fragile, and hence is very alluring - to me at least.