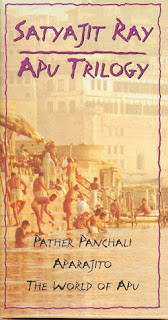 Pather Panchali (Song of the Little Road), Aparajito (The Unvanquished) and Apur Sansar (The World of Apu), the three mesmerizing, lyrical tales encapsulating Apu’s journey from birth and childhood to adolescence to manhood, respectively, (cinematic equivalent of Bildungsroman), propelled Satyajit Ray from an aspiring filmmaker and cinephile to immortality as the greatest genius of post-independent India. Apu’s fascinating relationship with his elder sister Durga in Pather Panchali, his taking over responsibility after his father’s demise in Aparajito, his fleeting attempt to be a family man in Apur Sansar – these are themes that have been etched in my mind. Watching the lyricism, the bleary-eyed beauty, the complex and multi-layered character development of Apu, the emphasis on the sensory and visuals over narrative reminiscent of films of the silent era, the strong influence from the distinctive Italian genre of neorealism (Ray was heavily influenced by Vittorio De Sica’s The Bicycle Thief), one can feel Ray’s passion and love for cinema, and appreciate his impeccable eye for detail. Stories of how Ray managed to complete Pather Panchali with limited funds and against numerous obstacles are stuff that legends are made of. Apur Sansar, perhaps the best among equals, also kick-started Ray’s long and fascinating collaboration with actor Soumitra Chatterjee, whose sensitive and intense portrayal of Apu’s manhood is terrific to say the least. The beauty, joy and pathos painted in the Apu trilogy are unmatched in any trilogy before or since.

Fantastic! Wish we could find this ASAP.

I really hope that you do cos this trilogy is cinema at its distilled best. Do also have a look at the review of Nayak, another Ray favourite of mine.

Definitely one of the best films in world cinema. You can check out a review of Pather Pancahli, the 1st film of this trilogy- here at the Culturazzi Website
Culturazzi is a club that strives to bring people in arts, cinema, literature, music and theater across the world together on a common platform, where they can share their thoughts, opinions, and interact with each other.

We regularly post reviews at the Culturazzi Club Review Section
Would love to know what you all feel about it :-)
Regards,
Culturazzi

One thing I love about this trilogy is how you can see Ray's filmmaking style, initially loose and kind of primal evolve into something more polished and professional (both approaches have their virtues) - more importantly, how this evolution reflects Apu's own journey from the sometimes crushing challenges but also natural wonder of his childhood to the excitement of young adulthood, the crushing disappointment as life weighs down on him, and eventually the acceptance of life & its responsibilities that comes with full maturity - as long as we're lucky and/or able enough to get there.

I need to see Aparajito again; I was blown away by Pather Panchali and World of Apu but the middle film kind of slipped through the cracks for me.

Interestingly, though I've mentioned in my review that I reckon The World of Apu the most, over the years my stance has changed a bit - as of today (and for sometime now), I consider Aparajito as the best of the lot, followed by Apur Sansar & Pather Panchali (in that order). The fact that Pather Panchali is so highly regarded by most cinephiles speaks volumes about the other two films in the trilogy.

Most people that I come across, who aren't that well acquainted with Ray's body of work, associate him only with Pather Panchali, and refer to his movies with the cliched epithet "lyrical & humanistic". His films were so much more than that, and like Kubrick, he traversed across a plethora of genres in his lifetime - psychological dramas, romantic comedies, political satires, chamber pieces, musicals, fantasies, dark urban chronicles, historical films, social satires, and so much more.

In fact there are a number of movies, apart from Apu Trilogy, that I consider very highly - Aranyer Din Ratri (Days & Nights in the Forest), Nayak, Goopy Gyne Bagha Byne, Charulata, Calcutta Trilogy (especially Pratidwandi & Jana Aranya), Agantuk, Jalsaghar, Kapurush, etc. Despite making so many films in his career, there are hardly a few that I consider 'weak', and that too only relative to his best works - no wonder I consider Ray among my favourite filmmakers :)

I'd really like to hear from you, Joel, on his other films as & when I feel interested in giving them a try.