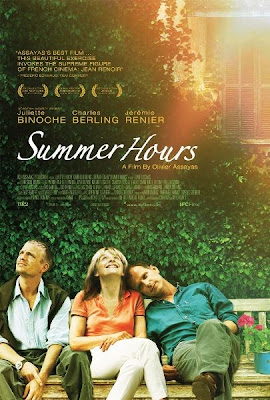 Assayas’ Summer Hours was a serene, rueful and deftly executed tale of three siblings who must come to terms with the mortality of their septuagenarian mother, the sole link between them and their shared past. The elegantly paced and scored film begins on a pitch-perfect note with Frédéric (Charles Berling), an economics professor who still resides in France, Adrienne (Juliette Binoche), a successful designer settled in the US, and Jeremie (Jeremie Renier), a corporate executive who is about to move to China for professional reasons, and their respective families, getting together at their family mansion in order to celebrate the 75th birthday of their mother (Edith Scob). The brilliantly staged prelude, through casual conversations and subtle observations, introduces us to each of the disparate characters, including the mother who is in a dilemma as to what shall happen to her invaluable collections courtesy a renowned artist she was a muse to. The sequence closes with the aged matriarch reminiscing about her life, and in a marvelous narrative choice, her death quietly occurs off-screen. The siblings must now make the tough choice of what to do with her possessions – Frédéric wants the place and its belongings to be kept for the memories they house, Jeremie wants them sold off as he needs funds for his relocation, and Andrienne, with the casting vote, sides with her younger brother as she has no plans of coming back. Berling gave a top-notch performance – his silent reaction when the decision to sell off is taken, was heart-breaking, while Scob too was terrific in her brief role. The inevitable passage of time was nicely captured in this gentle and non-judgemental observation on the French upper class.

The film is definitely devoid of sentimentality or cultural snobbery, yet it's as deeply felt as any film in recent years. It's it's deft human insights, and it's treatment of the 'transience' of possessions, it paints a valid portrait of human psychology at a defining moment. The film is also beautifully filmed, and you are quite right that the death is handled with subtlety off-screen.

Thanks a lot Sam. The best part was, despite the strong emotional core of the film, Assayas knew exactly how much to show and where to cut - and that further heightened its emotional impact. This sure will feature prominently when the year 2008 comes up in the Yearly Countdown at WitD.