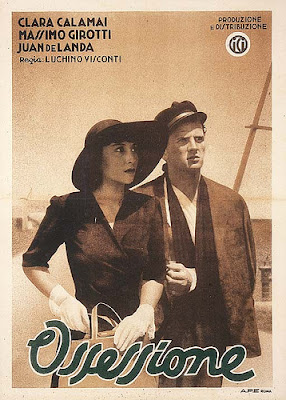 Luchino Visconti’s seminal debut feature Ossessione wasn’t the first adaptation of James M. Cain’s brilliant hardboiled novel The Postman Always Rings Twice – that would be the 1939 French film Le Dernier Tournant; the most popular – the 1946 John Garfield noir; the sleaziest – the 1981 Jack Nicholson starrer; or the latest – the 2008 German film Jerichow; but it was the best of the lot. Credited by film historians as one of the earliest illustrations of neo-realist cinema, it provided a remarkable amalgamation of noir sensibilities, viz. bleak pessimism, fatalism, wrong choices and bad luck, with the grime, poverty, hopelessness and desperation prevalent in war-time Italy. The classic storyline was about a penniless drifter (Massimo Girotti) getting into a torrid affair with the sultry but frustrated wife (Clara Calamai) of the older and gregarious owner (Juan de Landa) of a thriving café. Sensing the chance to get rid of her husband without losing the riches in the process, she seduces the stupid young man into committing murdering him. However, as is generally the wont, their crime catches up with them – first the form of guilt and suspicion, and then, when they finally manage to reconcile, their comeuppance in the most wryly ironic manner possible. Calamai was excellent as the sexually unsatisfied wife who wants to start afresh but not from scratch, the setting and cinematography provided for a harsh and dreary here-and-now feel, and the homoerotic elements, not there in the book, was noteworthy as well. The film angered both the then fascist government and the church, but fortunately it managed to survive their valiant attempts to suppress and even destroy it.

Excellent work Shubhajit! It’s a fatalistic work, but it’s also the first great Italian neorealist film. I once read somewhere that the Fascist censors gave Visconti difficulties with this film, as it showed both adultery and poverty – two subjects “banned” in fascist Italy. One can recognize the dominant influence on Visconti of Renoir and Marcel Carne, The director managed to transform everything he touched –actors, houses, objects, light, dust–into symbolic elements of his personal lyricism.

I got hold here of an article published in 1948 with co-scenarist Angelo Pietrangeli describing the film, which he admits was to “change the face of the Italian cinema and establish its world-wide influence”:

“A long traveling shot a la Renoir ends in front of a service station erected along the road like a frontier post. Suddenly, in a lyrical break so abrupt that it takes one’s breath away, a camera flight introduces us royally to a character, a character still without a face, his vest unbuttoned over his sunburned skin, exhausted and hesitant, as a man would be who is stretching his legs after a long sleep in a truck. Are we the Gino of OSSESSIONE? Let us call it simply Italian neorealism. Of course the style was taken to its ultimate realization by Italian master Vittorio De Sica with such landmark films like SHOESHINE, UMBERTO D and BICYCLE THIEVES.

Thanks a lot Sam for sharing a paragraph from Pietrangeli's review of the film. I too have read that the film faced difficulties with the censors on account of its grim & lurid subject matter. And yes, I guess this is indeed referred to as the first work in the seminal Italian Neorealism. Interestingly, this would also rank as my favourite among the various adaptations of the James Cain's novella that I've watched so far.