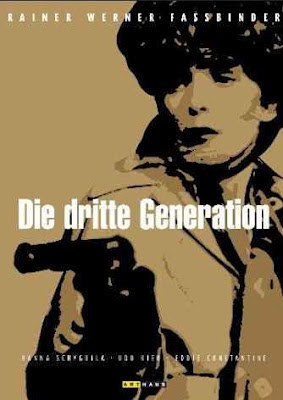 Sandwiched between The Marriage of Maria Braun and Berlin Alexanderplatz, two of his most internationally renowned films, The Third Generation was a searing and experimental black comedy by German New Wave auteur F.W. Fassbinder. A personal project for him, the film was marked for its deeply political content, scathing and subversive tone and acerbic humour; consequently, not did Fassbinder have to finance the movie of his own, it also faced considerable hostility upon its release. Cheekily divided into six parts with each beginning with quotes purportedly taken from scribblings inside public toilets, the movie is about the mundane lives of the members of a West German underground revolutionary cell, and their rather futile and oftentimes amusing attempts at terrorism to bring the State to its knees. The group includes a motley crowd of idiosyncratic, unspectacular and everyday characters who meet at one the member’s apartment to plan their activities. The group members are neither ideologically active nor politically astute – they are instead the hapless outcome of their fierier and more idealistic predecessors, and their goals are thus not a consequence of any egalitarian or earth-shattering ideologues. Ironically, the anti-capitalistic quote by Schopenhauer, “The world as will and idea”, forms the recurring motif that sets in motion their anarchic activities that inevitably end in complete disaster for them. Darkly comic, intellectually challenging, and deliberately overplayed in order to impress upon the ludicrosity of the proceedings, the film’s most memorable sequences include the hilarious robbing of a bank, and a gleefully absurdist climax.

Yep, it's subversive and political and pointedly humorous, especially the climax. Fassbinder has made some great films (including several masterpieces), and while this film isn't quite in that league, it's still an accomplish work for many of the reasons you frame here in this excellent capsule appreciation.

Thanks a lot Sam. The movie was such a joy ride despite its cerebral content. To be honest though, I still have loads of Fassbinder's movies to explore.

Seems like a great film. I enjoyed Fassbinder's ALI so I will see this eventually. Good mini review

I quite liked it and would certainly recommend it you if provided you have a liking for irreverent black comedies.