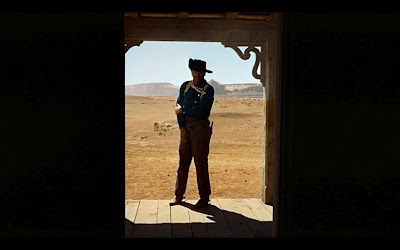 All things considered, The Searchers remains as possibly the greatest masterpiece of John Ford. This was also the movie that begun the fascinating transition from the rather straightforward heroism of earlier Westerns to their darker, more ideologically challenging and revisionist counterparts, and consequently irrevocably reshaped this quintessential American genre forever. The movie had John Wayne playing the role of Ethan Edwards, a laconic former Confederate soldier with a twisted moral code. He returns to his brother’s residence from the frontier after years of absence; his homecoming, however, is shortlived, as Scar, a ruthless Comanche chief, massacres his brother’s family, and abducts their younger daughter Debbie. The major part of the film is about the five-year odyssey that Ethan undertakes with single-minded focus in his quest for revenge and for rescuing Debbie, with his brother’s adopted son in tow. Ethan’s unflinching hatred towards Indians which borders towards racism (deliberately left unexplained by Ford), his propensity for violence, and his unpredictable reaction upon finally stumbling upon Debbie, now grown-up (played by Natalie Wood), make it impossible to qualify him along the good-bad divide or in any simple terms, and make him seem anything but an all-American hero. Wayne’s towering performance was superbly aided by the film’s enthralling visuals, iconic framings and stunning landscapes – the harsh Mountain Valley locales provided for a terrific allegory to the inner demons of the deeply ambiguous protagonist, with this incredibly influential classic serving as an emotionally complex and subtly bleak meditation on the genre itself.

It's certainly the most persuasive candidate for the title of Best Western of All Time, and pretty much for all the superlative points you bring to the table here: John Wayne's towering existential performance, the spectacular settings, Frank Nugent's screenplay and certainly Max Steiner's extraordinary music. But perhaps your final sentence says it all. Among Ford films for me it would rank near the top, with only THE GRAPES OF WRATH narrowly ahead. But there are some days I think they are dead equal.

Yeah, this would most certainly be a powerful candidate for the best Western of all time, along with The Wild Bunch, The Good the Bad & the Ugly, and the likes. The greatest contribution of the film, apart from its cinematic value, possibly lied in its trendsetting nature - the role it played in spawning a generation of revisionist Westerns & changing the nature of the genre itself. Thanks a lot Sam for sharing your thoughts about this John Ford masterpiece.

Lana Wood, who played a young Debbie Edwards in The Searchers, is scheduled to appear at the 2014 Mid-Atlantic Nostalgia Convention, Sept. 18-20, in Hunt Valley, Md., at the Hunt Valley Wyndham Hotel. Also scheduled to appear are Piper Laurie, Veronica Cartwright, Angela Cartwright, Lee Meredith, George Lazenby, and more. More information is at http://midatlanticnostalgiaconvention.com.