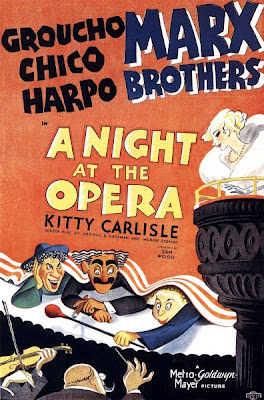 Marx Brothers shifted their allegiance from Paramount to MGM with A Night at the Opera, their most commercially successful venture. This was also the first film not to feature Zeppo, the fourth Marx, and thus the team of brothers officially became a trio instead of a quartet. Unlike the incredible and anarchic political satire in the garb of high farce, viz. Duck Soup, arguably their greatest artistic accomplishment, this was a rather apolitical affair and more in the tradition of “pure” comedy. The film has Groucho as a wily promoter who is after the money of a wealthy patroness who is desperate to make her way into elite social circles. An opportunistic German businessman signs a pompous tenor for his debut in the US, much to the dim-witted lady’s delight. Meanwhile Chico has become the manager of a talented tenor looking for a break, and illegally boards the ship bound for America. With the laconic Harpo thrown in for good measure, the Marx brothers create the sort of pandemonium that only they could, and the hilarious berserk that ensues makes a mockery of the best laid plans for those in charge. Groucho’s trademark one-liners, wry humour, straight-faced witticisms and cynical retorts made for some of the funniest banters. He, along with the zany Harpo and the eccentric Chico, made this madcap and irreverent comedy a delightful watch. Some of the most memorable sequences include, Groucho and Chico’s absurdist debate over a contract, hordes of men and women randomly being invited into Groucho’s tiny cabin in the ship, a hilarious dinner order, the fooling of an investigating officer in a hotel room, and the gravity-defying rampage in the climax.

Although I prefer most of their Paramount stuff, this is pretty funny in its own right with many classic scenes. For me the opera sequences do drag it down a bit. I grew up watching the Paramount films, so Duck Soup, Animal Crackers, Monkey Business etc are my faves. Duck Soup being their greatest, and probably my favorite comedy of all-time.

For me this great comedy ranks in their immortal three with DUCK SOUP and HORSE FEATHERS. It's probably #2 behind DUCK SOUP and it contains some of their greatest gags and set pieces. The mirror sequence is an all-time great ones as are the ones you mention here is this terrific capsule.

Though I haven't really watched much of Marx Brothers' films, but from what I've gathered, there have been loads of debates as to which phase of their career (i.e. Paramount vis-a-vis MGM) was the better of the two. And I guess, like you, most cinephiles tend to pick the former on account of the kind of anarchy and brazen political incorrectness that phase of theirs represented. Interesting to know that Duck Soup doesn't just rank as your favourite Marx Brothers film, but also as your favourite comedy film of all time.

Like Jon and you, Duck Soup stands as their greatest achievement in my humble opinion as well. Some of the gags and banters were indeed hilarious, though, in the end, it lacked the kind of transcendental qualities that Duck Soup had. Thanks Sam for the good words.

The only thing that stops this film, IMHO, from being in the same class of comedy as DUCK SOUP, HORSE FEATHERS and MONKEY BUSINESS are the dull musical numbers with Kitty Carlisle and Allan Jones that drag the entire movie to a stop. Fortunately, the Brothers resuscitate the film as soon as they reappear. A terrific review.

Yeah, the musical numbers dampened the flow for me too. They were overlong and not very pleasing to the ears as well - the director would have done well to keep them to a bare minimum. But yes, as you noted, the brothers more than made that up with their hilarious gags, word plays and humour. Thanks a lot John.