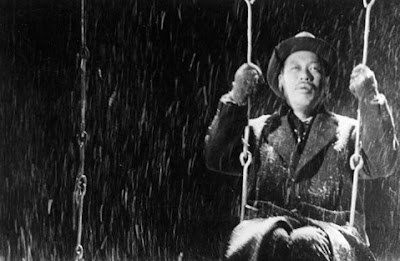 One usually tends to associate Akira Kurosawa with such staggering samurai epics as The Seven Samurai and Ran, among many others. Ikiru, despite not being archetypal in that sense, nonetheless remains as prescient, tragic, emotionally affecting and enthralling, as Kurosawa’s other masterpieces. Kenji Watanabe is a stoic and intensely lonely government bureaucrat living a drab existence; he’s been doing his job detachedly for the past 30 years, and is hopelessly fond of his son (despite it never being reciprocated). He’s woken out of this stupor upon being diagnosed with terminal illness, and his uneventful life suddenly goes berserk. Initially he starts doing things he never did in his life, like taking an announced leave from his workplace, and plunging into the hedonism of Tokyo’s nightlife. However, with only a few months left in his life, he decides to do something that will leave behind his legacy, however small, in the world. This deeply humanistic film, filled with heartbreaking pathos, remains an astounding thesis on existential crisis, societal hypocrisy and one man’s quest to find the meaning of his life. It is littered with sequences that would leave permanent imprints on ones’ mind, like the one where the inebriated Kenji breaks into a soulful song at a bar. Ikiru benefited immensely by Takashi Shimura’s devastating performance – his acting is a near-treatise on how to portray complex emotions merely through facial expressions, eyes and body language.

Beautiful review! To date I've only seen three of Kurosawa's films (Rashomon, 7 Samurai, Yojimbo) and with Ikiru I'm really interested to see how he drifts away from the warrior themes and period piece aesthetic present in those. I've always heard it's a wonderful film but I have yet to get my hands on it. Should remedy that.

Hello Shubhajit, I was always coming to this blog but almost all the movies reviewed were unseen. Hence, no comment were made from my side.

This time I am also on Akira Kurosawa streak after going through his must read biography: <a href="http://www.amazon.com/Something-Like-Autobiography-Akira-Kurosawa/dp/0394714393>Something Like An Autobiography</a>

Ikiru, what can be said. You have already said about such a humanist movie.Good work man, go on..

Thanks a lot Alex. I've seen a few more than that, and must say I really admire his tremendous body of work. And Ikiru is sure up there with his very best - some even say it was his best film. Do watch it, as I'm sure you'll like it.

Thanks buddy. Great to know you read his autobiography, it must have been a really enlightening read. Though I'm not in a director-specific streak, I sure am planning to watch the few must-see's of Kurosawa & Bergman in the recent future.

Such an emotional experience, can almost bring a tear to my eye. My favourite Kurosawa by far, such a timeless story that will never go out of date.

Yes, the film's emotional impact was quite overwhelming for me too. Though I don't cry while watching movies, but I could very well have. Thanks buddy.

I really appreciate the more character driven Kurosawa tales. A good accompaniment piece to this is Drunken Angel. Another one you might want to check out is I Live in Fear (aka Record of a Living Being) - which has an outstanding performance from an absolutely unrecognizable Toshiro Mifune.

Thanks a lot for suggesting the two Kurosawa movies, but they're already in my radar. I've seen most of his acclaimed Samurai films, so yeah its time I moved to his non-Samurai oeuvre with greater thrust.

Oh So you did manage to watch Ikiru afterall... I faintly remember we having discussed it after i saw this movie this Jan. and I will say only one thing - Knowing that each your stars are reserved only for the deserving flicks, I would say Ikiru deserves nothing less than the full.. My best moments in the film - Takashi Shimura's expressions , the funeral scene (great portrayal of how humans think and bent on forgetting easily ) and the haunting song in the end.

Yes, I did manage to watch it after all, and suffice it to say, I was absolutely bowled over by its mournful beauty, profundity, and heart-rending portrayal of the simple joys and sorrows of life. The scene that affected me most was the bar scene where he breaks into an impromptu song. Takashi Shimura's acting in this film would rank among the greatest performances ever recorded on a motion camera. And yeah, the score was lovely too. Thanks buddy for joining in.

ABSS....One also gets such a wonderful insight into the society and way of life in urban Hapan. AK's talent to transform a simple yet very powerful story as a masterpiece using the art of master-storytelling is the highlight here.. And yeah i agree, one of the best performances by TS....

Good heavens. What a blog. Just stumbled on to it.

No movie ever rattled my cage as hard as this one. And the way Kurosawa chooses to end the funeral scene with what feels like slapstick always just amazed me.

Thanks a lot MEtS. It'll be a pleasure to have you here - the more, the better :)