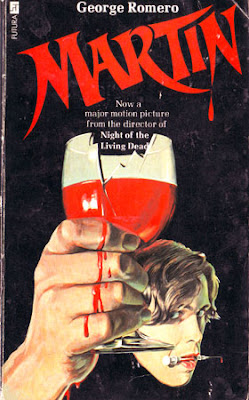 George Romero is considered the father of zombie flicks courtesy his iconic debut film Night of the Living Dead in particular and his “Living Dead” series in general. But, as happens in such case, the other works of such filmmakers tend to get lost – case in point, his pseudo-vampire film Martin. The shoddy look of this ultra-low-budget film and its moments of grisly violence might be off-putting to some, more so given its subject matter; but one shouldn’t be misled as this remains an interesting, intriguing and intelligent reworking of the vampire sub-genre. It’s protagonist is a shy and quiet young guy – the eponymous Martin. However, contrary to his demeanour, and as pointed out in the chilling opening sequence, he has a bizarre fetish for blood, maybe even necrophilia. Consequently one would imagine he’s a vampire. However, unlike those belonging to that mythical clan, he doesn’t satisfy any of the criteria that have come to define vampires, viz. being afraid of the cross, avoiding sunlight, possessing super-human strength, etc. That said, his uncle, in whose house (located in a dilapidated small town) he takes lodging, refuses to believe in Martin’s logic that there’s no such thing as “magic”, and this ultimately leads to a shocking finale. The movie is completely bereft of any stylization or artificially infused thrill-quotient; its matter of fact tone, leisurely pace and seedy picturisation are hence responsible for its nightmarish and haunting qualities.

Glad you liked it! I have yet to post my review (though it's completed) and make the same observations; MARTIN can be taken too lightly because of its low budget look but is powerful nonetheless. Maybe more so since Romero had to focus on character and story.

I watched Romero's KNIGHTRIDERS too and finished my review. It's one of his few films that isn't horror or science fiction. I probably liked it more than I should have but think it's worth checking out. I actually noticed a few locations that are near my home...though I was just a kid when he filmed it.

Thanks Alex. Yes, there's depth in the film which a viewer will feel if he/she manages to look beyond the "cheap" look & shocking plot. I agree, Romero invested time in building his characters and the mood, and that sure paid healthy dividends. I'd be really interested to read your take on Martin once you post your review of it.