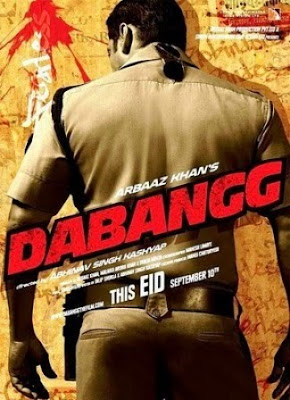 Dabangg has everything necessary for it to qualify as a classic bad movie, only that it really isn’t a classic bad movie per se. Allow me to elaborate. Set in the rural badlands of Uttar Pradesh, the film appears on first glance akin to the kind of pulpy 80’s and 90’s Hindi movies that would comprise of over-the-top action and machismo, and littered with overtly “filmy” dialogues; but dig deep and you realize that it is, in essence, a parody of the same. At the centre of the film lies the larger-than-life character of Chulbul Pandey (played with memorable swagger by Salman Khan), a corrupt cop with devil-may-care attitude, but with his heart in the right place. This Indianised version of Spaghetti Westerns is a heady concoction of family melodrama, farce, impossible plot constructions, cheesy romance, below-the-belt humour and Matrix­-style action, with a few song-and-dance sequences thrown in. What I found most likeable about the film was that, its satirical intentions are very subtle, without an ounce of snootiness whatsoever. Thus, like Grindhouse, it is the kind of film that the first-row crowd of theatres would be bowled over by, the ones whose days of fun collided with watching “masala” blockbusters would find it a walk down the memory lanes, and the more discerning viewers would have loads of fun while also appreciating what the film actually represents.

Thanks for a such wonderful review. I am not fascinated on this film until I read this review. I am gonna checking this out soon.

The pleasure is entirely mine. Thanks for visiting.

Nice read. I felt that movie did successfully what it wanted to achieve. Masala flicks are something that I would prefer not to watch, but this movie did not bore me for a single second and I watched it at one go.

Thanks Swarnabha. Exactly... the movie wasn't pretentious and stuck to its core intent of providing wholesome entertainment. I too tend to avoid "masala" flicks, but I was glad I didn't give this one a miss.

I liked your review but if I have to rate will give it minimum 4 stars. Its very difficult to create a chaotic film for front row crowd and Abhinav Kashyap succeeded in that. Interestingly Abhinav is real younger brother of Anurag Kashyap. Two brothers following two different schools :)

Thank you for the appreciation. Yes, it certainly was fun for the front row crowd. But, had that been the only aspect about the movie, I might have rated the film lower. But what really impressed me was that it managed to grab the attention of the discerning viewers too. Not many films belonging to this genre manages to do that, and that too with such unabashed audacity.

And yes, the 2 Kashyap's do represent different schools. However, having said that, the nice thing is they both seem to be deeply in love with the medium. Thus, despite having made a "masala" film, I'd say Abhinav Kashyap has managed to differentiate himself from his fellow makers of "masala" film.

In fact, I'd say he has a lot in common with Sriram Raghavan, whose movies Ek Hasina Thi & Johny Gaddar, despite being pulpy in nature, were wonderful displays of the director's grasp of and love for the medium.