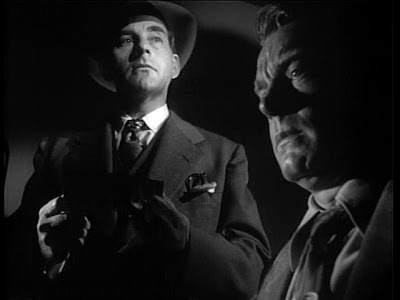 T-Men was the movie that catapulted Anthony Mann to the forefront of American directors in terms of recognition. Made in the form of a pseudo-documentary, it evokes memories of another classic noir made around the same time, Jules Dassin’s The Naked City. Narrated through a very matter-of-fact voiceover, and based on real events, the film is about an elaborate operation wherein two Treasury agents go undercover in order to infiltrate into, and in turn expose and bring to justice, a counterfeiting ring. In the process it managed to capture how corruption had seeped into the nooks and corners of post-War American society. Dennis O’Brian starred as one of the two agents who must stay one step ahead of the bad guys at all times, as in a job like this even a minor false move can be the difference between staying alive and getting killed. Though featuring a host of fine plot devices, the movie, like Mann’s next feature Raw Deal, is less about its structural aspects, and more about its style and mood, amplified by the exceptional use of shadows and camera angles. The film has its fair share of memorable moments, but what easily stands out is the ultra-violent scene where a two-bit underworld schemer is killed in cold blood in a steam bath. Even though it might not be a great movie per se, it still remains an essential B-noir and a gripping tale of “duty before self”.

Shuvajit, just to mention that I regularly follow your reviews. I envy your filmviewing habits

Incidentally, in this post you made a nice slip..."even a minor false movie can be the difference between..." :)

Thanks Anindya for following my blog. Really appreciate it, though would surely like to hear from you more often. And thanks for bringing to my notice the typo; have corrected it :)

"Though featuring a host of fine plot devices, the movie, like Mann’s next feature Raw Deal, is less about its structural aspects, and more about its style and mood, amplified by the exceptional use of shadows and camera angles."

Absolutely Shubhajit! And the steam bath scene you broach too is unforgettable. I had the great fortune of seeing this over the summer at the Mann Film Festival at the Film Forum, and found it no masterpiece, but a worthy footnote in Mann's noir output. You've sized it up most admirably here!

Thanks a lot Sam. Yeah, I distinctly remember your coverage of the Anthony Mann Festival, and that did play a huge role in making me watch Raw Deal & T-Men in the first place. Great that you agree that the steam bath scene remains the most striking moment in the movie.