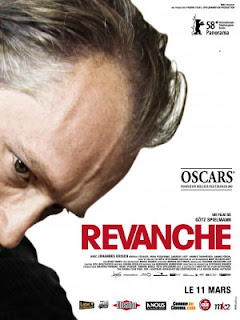 In an age of hyperkinetic narratives, the Austrian movie Revanche, with its leisured pace, might appear anachronistic to many. A character drama of the first order, the movie is about a former convict’s inner turbulence as to whether he should (or should not) seek revenge against the cop who accidentally killed his fiancé. Where revenge flicks go, it is absolutely antithetical to the likes of such explosive movies as Oldboy and A Bittersweet Life. Rather, what we have is an implosive character study of a man, stuck by a stroke of sudden misfortune, waiting to explode with cold, simmering fury. At the backbone of this extraordinarily gripping drama lie solid performances, grim realism, bleak, deglamourised vignettes and a deep sense of tragedy pervading the characters – factors that have made it structurally very similar to 4 Months, 3 Weeks and 2 Days (interestingly, like the Romanian masterpiece, this movie too is nearly completely bereft of any background score). Though never overtly expressive, the movie, nonetheless, is emotionally charged, with violence almost bursting through the seams. This brilliant, gloomy crime drama has really upped my interest for Gotz Spielmann, the movie’s director. By the way, on hindsight, the first half of the movie might appear to be a MacGuffin to many, but I feel it acted as a vital driver to what followed – both plot-wise and character-wise.

This is a film that grows deeper with multiple viewings. The movie can provoke so many responses and teh resolution of the story itself open to interpretations. Here is a conversation about the film at Satish's place. BEAR WITH ME!

We do not know, at that moment what she actually means, but we do later. For her husband, she does what she has to do. And for her family. Even though the church she visits might consider adultery taboo. I consider Susanne character one of immense depth.

The second act of sex between them occurs in the would-be child’s room. That means Susanne is hopeful, and maybe within herself she considers this a ritual. Who knows what she promised herself and God, and I cannot help thinking about the conversation she would have had with God.


Now, consider this Srikanth. Robert takes a life. How does Alex avenge that, albeit unknowingly? By seeding his mark in the family forever. If Susanne never knew that, I believe it wouldn’t have mattered. But she did and that makes the forthcoming life of this family so deeply fascinating. What does Susanne think now? She’s very understanding, and I believe she has a big heart.

But what about Alex here? At the end is he really holding Robert responsible? Or would he spend the rest of his life atoning for his mistake? Or has he already atoned, unknowingly, by giving life to the very man who snatched it away from him? I don’t know.

I would want to know your opinion here. "

Man, it is a darn complex film. i can only reply with questions

Is it by fate that Alex gets a chance for revenge without the bullet? It is only after their first tryst that Alex comes to know of the family's situation. His intention of revenge this way hence is not a calculated one. A coincidental revenge like the murder itself, just separated by time.

But revenge is true only when its done intentionally. So Alex's impregnation of Susanne can be MADE intentional only if he reveals his secret. It is for his satisfaction that he has to reveal the only facet he has control over. I personally believe he had put the photograph on the table deliberately. This is the only way Alex can have a control over his actions. He could not control Tamara's presence at the heist. He could not control the revenge (as said above).

Now why did he tell the secret to Susanne and not Robert? Well, to stay alive I guess. Saving the farm is the only promise to his grandfather he can keep in his life. By giving away his secret (which is a must now) he gets safety from Susanne. With Robert, it would not have been so (and would have been the great revenge he intends).

Now with the secret revealed, the onus is on Susanne now. The revenge will only be complete if Robert gets to know of the adultery. But then, if she reveals it she kills him in three ways - his impotence, the child's identity and her own patronizing of him (and more). So she has to keep it low. But again, she then would be the instigator of the revenge and in this case, would seem like believing Robert is guilty after all.

I also think that Alex could never understand why he wanted revenge. He could have prevented the murder himself. But in the end he may have just felt that keeping Robert alive is the biggest revenge possible (both as an instrument to destroy his vengeance and to satisfy it - like getting the best of both worlds). Letting the two guilty people face each other till Robert crumbles under the outcome of the deadlock, one way or the other. A revenge without the bullet. (now Alex feels like The Joker to me! minus that smile on that face)

And essentially, the outcome is either a boon or revenge depending on the knowledge and subjectivity of the characters.

I think atonement comes to Alex only at the time when he ran into Robert at the pond in the last few minutes of the movie. That's why he throws his gun into the waters after that incident. I also don't agree with Srikanth when he says that Alex had deliberately put Tamara's photo on the table to tell Susanne the dark truth about himself. Alex could not just arrange things for Susanne in the hope that she would definitely come to his farm house and sit around the dinner table one day. It just doesn't seem practical. Having said that, I also think that Alex had no intention to take revenge by impregnating Susanne as he was not clear about Robert's impotence till the very end of the movie. All he knew was that Robert and Susanne could not have any kids. That's it. After seeing this linearity in Alex's character, I think he is neither layered nor interesting.

But what gripped me is Susanne's character. After knowing the truth about Alex, what would she think? Will she blame herself for patronizing Alex, who was desperate to kill her husband? Will she feel guilty to give birth to the child bearing from such a person who all through their encounters knew his clear targets: Herself and her husband? Will she be repenting all her life due to this? If answers to all of the above questions is 'Yes', then yes, I believe Alex has taken the revenge, though inadvertently. The things which we couldn't know always fascinate us and yes, for that reason I liked this movie. But only because of Ursula Strauss. I think everyone except her in this movie is blunt.

Srikanth, thanks a lot for that. A nice conversation you've had regarding this wonderful movie.

I believe that Alex is a layered and complex human being - a well rounded character. His want for revenge isn't just physical but psychological as well. However, in a brilliant decision by the director, Alex just can't inflict that one final body blow. Perhaps he's not a revenge seeking kind of person despite his notorious history, or (and this is the reason I find more appropriate) that one moment of madness that compel one to seek vengeance through violence, has just passed for him. Consequently, despite his burning desire to punish Robert, he just can't physically get it done with.

Well, like Amar, I too don't think Alex impregnated Susanne in his quest for revenge. It was I believe a spontaneous act on his front, or perhaps an attempt to get closer to his target. His going to her house might have been a deliberate ploy to hurt Robert where it would hurt most - but, in essence, I feel it was far more complex than that.

And this deep ambiguity in Alex's actions - from his brief relationship with Susanne to his throwing away his gun - have added layers of complexities to his character. After all one isn't supposed to be able to decipher a person so easily - even after years of knowing someone, a large fraction of his/her being still continue to remain unknown to us. And thats one facet that has been very well depicted in the movie. We just fail to gauge what's behind Alex's skull for the simple reason that his character is as well developed person of flesh and blood as any movie character can be.

in the top ten of the year for me.

Yeah, a really well made movie this one...