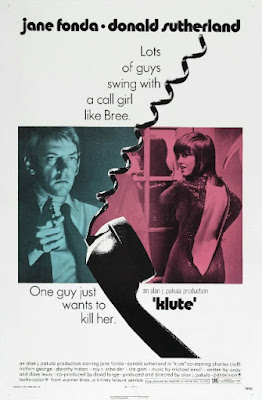 Klute and Tout Va Bien, despite being such remarkably disparate films formally, aesthetically and thematically, possibly served as the two most striking roles for Jane Fonda’s magnetic offscreen activism from that period – ranging from her staunch feminist stance to her defiant anti-war protests – which surely separated her from many a “star” who’re trapped by their onscreen images. The first chapter in Alan J. Pakula’s “Paranoia Trilogy” – this was followed by The Parallax View and All the President’s Men wherein, like a concert that slowly boils to a crescendo, each movie was a notch better than its predecessor – operated as an intriguing overlap between psychological thriller, sexploitation, character study and feminist commentary. It qualifies as a “conspiracy theory” movie too for its paranoia-laden atmosphere and elements of surveillance, even if it lacked the stirring governmental/big business mistrust of the more thrilling examples of this sub-genre. Further, its self-conscious, overly stylized canvas at times dampened its edge and grit that could’ve made it a more gripping work. However, the captivating characterization of Bree Daniels – a self-assured high-end New York call girl who loves her work, is confident of her prowess and is in complete command while with her well-to-do clients, and yet with a sense of vulnerability that she rarely reveals to outsiders – and Fonda’s magnetic portrayal largely compensated for some of its clunkier elements. The storyline – one that’s been tried ad nauseum by Hollywood – involved a taciturn detective (Donald Sutherland) who makes contact with Bree while investigating into the mysterious disappearance of a company executive; however, he soon realizes that her life might be in danger and eventually starts falling in love with her while trying to elicit her cooperation.