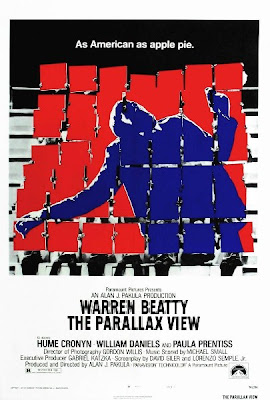 Sandwiched between Klute and All the President’s Men, Alan J. Pakula’s The Parallax View oftentimes gets lost amidst the fanfare surrounding the other two. Over the years it has been recognized as a decent conspiracy thriller and a perfect reflection of the paranoia and distrust that defined the era in which it was made; in fact, some even see it as an allegory to the JFK-assassination. The various political subtexts aside, this still ranks as a reasonably decent thriller. Warren Beatty gave a fairly competent turn as Joe Frady, an investigative journalist who stumbles upon a fiercely kept secret – that of the existence of a corporation which specializes in political assassinations; it of course goes without saying that they also murder people who might have even the slightest inkling of any of these assassinations. Thus, when a popular senator is killed in broad daylight, any and every person who was standing close to him starts dying of seemingly mundane causes. The more Joe starts uncovering the murky details the more he gets sucked into this deadly cat-and-mouse game, all the time unaware that he’s being watched by the same group of people he’s spying on. The film’s nightmarish tone is laden with dollops of paranoia and unease. However, that said, (though I shouldn’t perhaps mention this given that it’s a thriller at the end of the day), I felt hoodwinked by the highly unsatisfactory climax, leaving me a tad underwhelmed in the process.

Good timing on this entry - I just bought the film this weekend (I've got a clip show coming up in October on my blog and I felt I had to include this), and it arrived at my doorstep today. I stumbled across it on TV years ago without having a clue what it was - in fact I tuned in during the infamous montage and was blown away, thinking "What the hell am I watching?!"

It's hard for me to see this as one movie, but rather as about a dozen, some of which are fun and entertaining, some of which are moody and evocative, a few of which are just complete messes (what's with the car chase accompanied by, if memory serves, banjo music?), others are among the most brilliant cinema's ever seen. The story wanders all over the place, almost like a Mel Brooks movie taking itself seriously, determined to explore every genre and style known to the 70s.

I think the second half, focused on Beatty going "undercover", is much stronger than the first half - much more focused and chilling. I actually feel the conclusion is pretty effective, and almost justifies the chaos that went on before.

Thanks a lot Joel. That's an interesting coincidence.

Yes, I do agree with you on you general assessment of the movie. There are parts in the movie that I too found really engaging, as also parts, as you too noted, which were on the shoddier side in comparison. But yes, on the whole, the atmosphere & pacing were really good, and they helped a lot in sustaining the sense of suspense and paranoia through its length.

Well, as for the ending, I guess be might very well be in the minority on that. I understand your points in favour of the unconventional ending. But the climax acted as a bit of a turn-off for me. I'm not saying that a director needs to provide us with a conclusive finale. But I felt the story ended quite abruptly here. But, as I said, that certainly is a subjective matter and open to individual interpretations and appraisal.

Thanks again Joel for posting in detail your opinion about this movie.