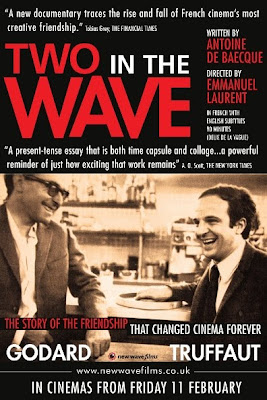 Francois Truffaut and Jean-Luc Godard remain two of the most iconic as also iconoclastic filmmakers the world has seen – they were as much trendsetters as they were path-breakers. The two former celebrated film critics at Cashiers du Cinema were at the forefront of the legendary Nouvelle Vague movement; their debut features, The 400 Blows and Breathless, respectively, remain cornerstones in world cinema. Yet, their decades of endearing friendship and frequent collaborations notwithstanding, they were also two very different persons with contrasting backgrounds, opinions and personalities, and these facets, along with a host of others, played significant roles as, over time, rifts started developing between the two – so much so that by the later halves of their careers, they were as antagonistic towards each other as one can be. This interesting documentary, filmed with the same of kind of freewheeling spirit and charm as the early films of Truffaut and Godard, and filled with footages and anecdotes worth preserving, has done a marvelous job at documenting the evolution of these two fascinating auteurs and their complex love/hate relationship. To top it all, it also introduced a third angle in the form of the renowned French actor Jean-Pierre Laeaud who was literally torn apart because of this feud as he worked regularly with both right from his teenage days. And this unique dimension added layers of profound eloquence to the tale of tumultuous friendship between the two giants of world cinema.

Oh I know this film well, and did react favorably towards it. What you say here in this capsule is quite right- it was the later antagonism between these two French icons that darkened what was once a banner friendship. As I recall there was some issues within the Cashiers du Cinema that instigated and exaserbated the situation. I also recall the film being more about Godard than about Truffaut, and that the Cashiers context was dominant. As always you have penned a terrific review here.

Good writeup, though I wasn't nearly as impressed with this. Like what was the point of the pretty actress?

Thanks Sam. Yeah, this was a nice documentary, and that too on a really interesting topic. Well, I guess the rift started forming during 1968 student strikes in Paris - thought they stood beside each other during the strikes, their political and artistic opinions began to diverge considerable. Also, I felt the documentary gave emphasis to both, in fact it started with closing shots of The 400 Blows. But yes, as you said, the strong opinions of Godard have been given considerable emphasis to. Thanks again Sam for initiating the discussion & the appreciation.

Thanks. Yes, I do agree with you on that - the presence of the actress was not relevant or value-additive. But I'm okay with overlooking that minor glitch given the overall quality & content of the documentary.