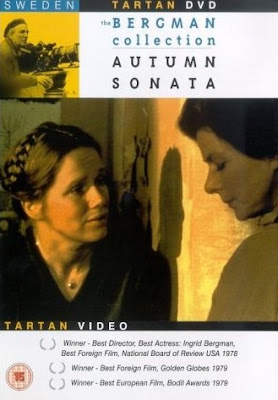 "Yet another masterpiece belonging to his vaunted oeuvre, this remains a deeply intimate, immensely personal and layered tale of a complex mother-daughter relationship."

Indeed Shubhajit! It again illustrates the importance of classical music in Bergman's life, as the very essence here centers around it. Bergman is luminous and it's a probing psychological study. I agree with teh CRIES AND WHISPERS comparison, though that film is on balance a greater one than AUTUMN SONATA.

Classical music does indeed play an integral role in the movie, as it perhaps did in Bergman's life. The scene where the daughter plays out a piece for her mother, only for the mother to condescendingly show her how to actually play it, remains perhaps the most incredible moment in the movie.

I've loved both Cries & Whispers, and Autumn Sonata, and it sure is a difficult task to place one over the other.

I've watched this in the last 9 months or so. It's a tough movie, and almost difficult to watch at times with the searing pain of the characters laid open. Ullman is brilliant, as you mentioned and Ingrid is so cold and dark here, she's almost unrecognizable. This one for me though is kind of in the second tier of Bergman films, but I can understand why you praise it so highly. For me it's a very abrupt kind of film that is very jarring. But beautiful and deeply tragic nonetheless.

Sorry Jon for the delay in replying. Yes, lots of cinephiles don't place it alongside Bergman's most celebrate works like Cries & Whispers, Wild Strawberries, Seventh Seal, Fanny & Alexander, etc. The same tends to hold for his Scenes from a Marriage as well. I personally found both these films brilliant and worthy of being considered among his best works. As you aptly noted,the film is suffused with beauty, pain and terrific character development, and not to mentioned superb acting.