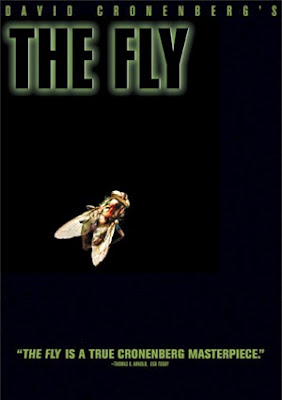 David Cronenberg’s The Fly wasn’t just a triumphant remake but also in many ways a reinterpretation of the 1958 original, and it remains an important work in the genre of ‘body horror’. Visceral, disturbing, grotesque and unapologetically provocative, even to this day the movie retains the ability to amaze and shock its viewers with equal ease and élan, as also make them conjecture and debate because of the various philosophical ramifications of the subject matter. Jeff Goldblum, in arguably the most fascinating role of his career, played Seth Brundle, a mild-mannered loner and a brilliant scientist who has secretly developed a machine that can teleport matter. When he finally discovers the means of successfully teleporting living beings too, he decides to have himself as a live guinea pig; it goes without saying, the results of his self-experimentation are not in any way pleasant. Goldblum did a brilliant job in effortlessly portraying Seth’s complex physical and psychological metamorphosis, and his descent into madness and chaos. Though Geena Davis’ acting can’t really be classified as great, she shared an interesting chemistry with Goldblum, with her character forming a vital hinge around which the story develops. Cronenberg did a terrific job in creating not just paranoia and unease, but also a sense of deep and all-pervading claustrophobia what with most of the action taking place in the confined interiors of Seth’s lab-cum-residence. He also made excellent use of special effects to accentuate the graphic and visual nature of the plot.

I guess The Fly is a warning about the dangers of experimenting, much like Frankenstein was? Goldblum is a bit of an oddball anyway, so the scientist loner was good casting. The Fly is one of Cronenberg’s better efforts I think, he isn’t my favourite director, his work is a little too freaky for me, and I’m unsure what his career is trying to say, though he certainly is an original filmmaker, and I admire his bravery, he's like a genre all to himself, Cronenbergian, ha ha ( : I prefer his recent “normal” films with viggo mortensen, I’m intrigued by his latest A Dangerous Method about Jung and Freud.

Great review! I think this movie is amazing but I don't know if I can ever watch it again. It's tough to get through because of how gross it all becomes, but it's brilliantly made. Cronenberg is becoming one of my favorite filmmakers the more films of his I see!

I wouldn't name Cronenberg as my single favourite filmmaker, but I do love his work - at least most of what I've seen so far. So yes, he's a director who I like, and The Fly would rank among the best of Cronenberg, alongside the likes of Dead Ringers, History Violence, Spider, and the likes. His body horror work is indeed freaky, as you mentioned, and yes, his "normal" films are indeed far more audience-friendly in comparison :) And yeah, A Dangerous Method is most certainly a movie I'm looking forward to.

Exactly, the same holds for me too! The more of his films that I see, the more I seem to watch his movies. He's a daring and eminently attention-grabbing filmmaker, and he's done some brilliant work. The Fly is sure one of them. Thanks a lot Alex for the kind words.

"Visceral, disturbing, grotesque and unapologetically provocative, even to this day the movie retains the ability to amaze and shock its viewers with equal ease and élan, as also make them conjecture and debate because of the various philosophical ramifications of the subject matter."

Beautiful word economy there to frame this perfectly. This is certainly one of the director's most popular and emblematic films, and as you rightly note, Goldblum is terrific, and won numerous year-end awards for his performance. You delineate his work quite well too but pointing to the physical and psychological metamorphosis. I am also a big fan of the Vincent Price original which works on a different level.

Thanks a lot Sam for the appreciation and kind words. A lot of things worked in favour of the film - right from the competent handling of the subject with all its subtexts to the great acting by Goldblum & the special effects. Goldblum certainly deserved all the year-end awards. Yeah, as you've mentioned, this movie might very well be one of the most definitive Cronenberg films.